Food photography is all about enticing the viewer to purchase a product, try a new recipe, or simply want to eat the food props. Unnatural lighting styles are sometimes used to produce flashy, eye-catching results. But more commonly, we are asked to capture food in natural and familiar ways. And what could be more familiar and enticing than food photographed under natural light? In this article, we’re going to discuss how you can produce pro quality images using only a window and your favorite foods. Let’s dig in… (pun intended)

The shadows in an image tell the story behind how it was created: Sharply defined edges to shadows are the result of hard, direct light such as that coming from a clear sky.  Indirect (diffused) light from a cloudy day produces fuzzy edges to shadows, also known as soft light. It can also be said that soft light has less contrast between the shadows and highlights.  Hard and soft light produce very different looking images. Neither is correct or incorrect, but rather a question of what look and mood you’re trying to create. 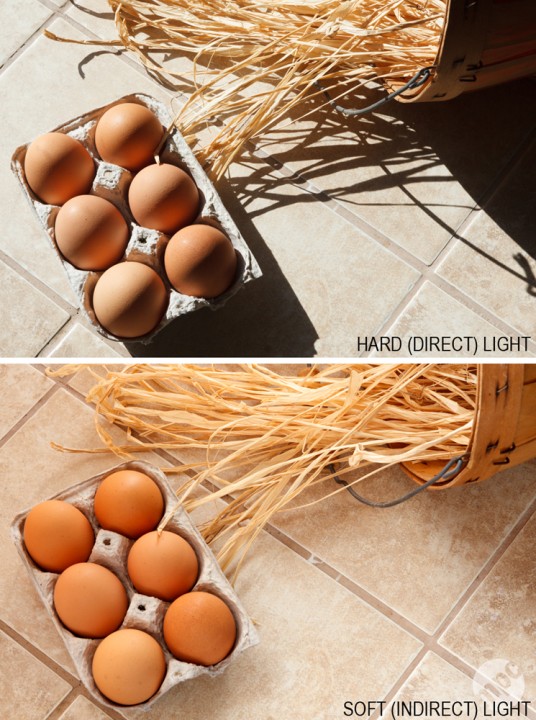 Most windows are placed horizontally, producing side-lighting and strong contrast between the lit and unlit sides. Contrast can be a good thing, because the highlights and shadows define detail and give apparent depth to an image. The direction of side lighting is relative to where we place our camera in relation to the window, and there are three basic options:

In the examples below, we’ve photographed these bay leaves with the same diffused window light, but turning the camera and photography table each time. There is a distinct difference between each image, most notable in the shadows on the plate and texture of the leaves.

All other factors being equal, moving your photography subjects further away from the window will result in a decrease in contrast. The reason we’re seeing less contrast as we move away is because the light is fanning out over distance.  For example, take a look at the pasta soup images below. The same volume of light is coming through the window in both cases. But at a distance of two feet, more light is hitting the window side of of the soup, and the bowl is blocking more light as well, producing darker shadows.  Moving this to a distance of 8 feet, the light has now spread in a wider pattern and less is hitting the lit side of the bowl directly. The wider spread produces more even illumination and less contrast, which can be seen as more detail visible in the shadows.

Now this may seem like bad information, considering we’re always told that larger light sources produce a softer quality of light. And if we’re moving farther away then shouldn’t the window act like a relatively smaller light source, and produce more contrast? Well, no. And the reason being that the size and distance of the sun don’t really change much just because we’ve moved our food props a few feet one way or the other.Remember, the window isn’t our light source… the sun is. It’s still a relatively small light in both cases because the sun is so far away. A window should be thought of more like a system for modifying light to fit our needs, no different than attaching a soft box or umbrella to a studio flash.

Working with hard, direct light is as easy as placing your subject in a window (or outdoors) on a clear, sunny day and snapping away. But if hard light and high contrast are not the look you’re going for, then it’s time to modify the sunlight somehow. There are two approaches to accomplishing this: diffusion and correction.

Diffusion happens by placing a translucent object between the light source and photography subject. This has the effect of scattering light in every direction, reducing contrast and softening shadows. Commercially made diffusion products are available in just about every size and shape from small, collapsible hoops to the gigantic panels and scrims used on Hollywood film sets. But anything that has a translucent quality (and preferably pure white color) can do the trick: shoot-through photography umbrellas, sheer curtains, bed sheets, thin plastic table covers… you get the idea.

Correction is the act of blocking direct light so that only indirect light illuminates your subject. We witness this effect every day as the sun rises higher in the sky and is blocked by roof peaks, awnings and even other buildings. The result is shade and indirect, bounced light coming in through the window, which has a softer quality.

In these two final example images above, on the left we’ve used sheer white curtains to diffuse the direct sunlight. The result is less contrast and softer light, compared to our hard light example at the beginning of this tutorial. But there is still a definite direction to the light in the scene, and plenty of contrast to define shapes.

Now compare this to the image on the right, where we’ve corrected the angle of light by placing a piece of white foam core over the bottom half of the window. Because foam core  is solid, and not translucent, this blocked any direct light from falling on our food props. There is still plenty of indirect light streaming in from the top half of the window, providing bounced light from every direction and a very soft quality seen in the shadows.  The corrected light in this case is so non-directional that there’s very little contrast left to define the shapes of the eggs.

A simple window can provide so many different styles of lighting as long as the sun is up and you have a firm understanding of the basics. We’ve only scratched the surface of what can be accomplished with window lighting in this article. There’s flags and gobos and all kinds other neat tricks to shape and modify light to your needs. The only real limitation is your creativity. And we will discuss those further in a future article. Until then, be sure to visit Fill Light For Food Photography to see how you can take window light to the next level by adding a reflector or bounce card. 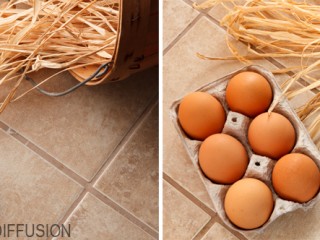