As mentioned in a previous article, Unsharp Mask is your starting point in learning how to sharpen in Photoshop, but it’s fairly limited. We’ll be looking at Smart Sharpen next, and tailored towards Adobe’s latest Photoshop CC. Older versions of Photoshop are slightly different but the overall function of the filter is the same.

Just as it sounds, Smart Sharpen is a much smarter way to sharpen, when compared to Unsharp Mask. As with Unsharp Mask, this should be one of the final steps in your workflow and completed only after your image is resized to its final output size and resolution (be it for print, web, or digital display). You should also be making these corrections to a duplicate layer only so that it does not permanently alter your image.

The biggest improvement of Smart Sharpen over Unsharp Mask is the ability to control the amount of sharpening in the highlights and shadows. Let’s take a look at the controls. 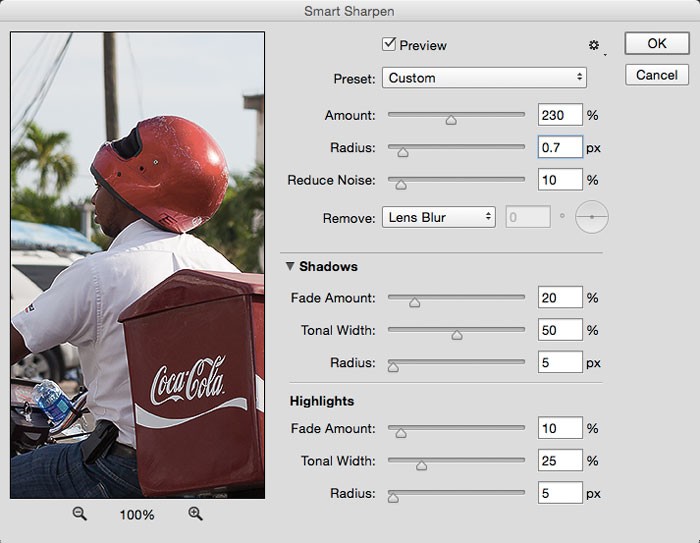 Amount.  This slider controls the amount of contrast added to the edges, as in Unsharp Mask.

Radius.  Similar to Unsharp Mask, this control sets the radius that the filter is applied around the edges. The larger the radius, the further away from the edges contrast is added, and the more pronounced the sharpening will be.

Reduce Noise.  An addition to Photoshop CC over older versions. This control will reduce noise while preserving sharpening around the edges. Remember the Threshold control in Unsharp Mask? Where a threshold of zero would actually sharpen noise? This new control finds that noise and reduces it.

Remove.  This control sets the algorithm that is used to sharpen around the edges, and there are three options.

Advanced Controls – this is where Smart Sharpen really takes a departure from Unsharp Mask. The Shadows and Highlights tabs allow you to control the amount of sharpening done in these tonal areas. Think of these controls as setting how much the sharpening is reduced in these areas, not how much is applied.

I then move down to the Shadows next. This requires a lot of practice, changing sliders, turning preview off/on, and interpreting your image. Where are the eyes supposed to be drawn? To the shadows? If so, you’ll probably want to reduce the masking taking place in the shadows, so your Fade & Tonal Width settings should be low. Don’t care about the shadows? Then set those adjustments higher so that sharpening is reduced in those areas – this will also limit the amount of grainy noise introduced into these areas. The same concept applies with your highlights.

There is no one cookie-cutter approach to using Smart Sharpen.  Have an understanding of what the controls do, and then adjust the settings until you get an image that works for you! 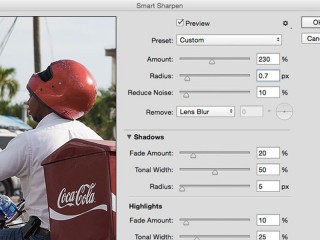