Photographing your first fashion show should be an exciting experience; it seems almost impossible to take bad pictures of beautiful people wearing gorgeous designer clothing. And yet the fast pace of the runway and sometimes unpredictable lighting or models can easily turn a first-timer into a nervous wreck. We’d hate to see you caught off guard and unprepared, so MyPhotoCentral.com has put together a few tips to turn your first runway show into a runaway success…

WHAT DESIGNERS WANT TO SEE

Have you noticed that runway images in magazines all tend to look the same? That’s because designers and publishers don’t need anything more than straight-forward captures that clearly show off the wardrobe. Save the artistic lighting and angles for your editorial fashion work, and focus on the basics for runway photography:

You’ll want to show up at least 30 minutes before the runway show is scheduled to begin. Even if you’ve arranged for media access in advance, this doesn’t necessarily mean a special spot has been saved just for you. It’s typical that we’re left to fend for ourselves and compete for a place to set up.

It can get pretty crowded in “the pit” (that special area set aside for press). If you’re lucky, you’ll be able to set up a tripod or monopod, or maybe even sit down and put a camera bag next to you. But it’s just as likely you’ll be standing elbow-to-elbow with a dozen or more photographers. That doesn’t leave much room to fumble around for gear or change lenses, so you’ll want to bring essential equipment only. Keep things like batteries and memory cards as easily-accessible as possible. Having two camera bodies is a good idea as well: one with a longer telephoto lens for capturing the far end of the runway, and another with a wider angle lens for up-close work.

Most runway shows are indoors, and the best events have carefully-planned lighting for producing great images and video. If that’s the case then you can leave the portable flash in your bag and point-and-shoot your way to great images. You’ll want to use a fast shutter speed to freeze the models in motion, and the largest aperture (smallest f-stop number) available for your lens. High ISO settings of 800 or higher are the norm.

Often, runway shows are hosted in dark venues or night clubs with distracting backgrounds, moving spotlights or colored light effects. Those light shows might look great live or in video, but will be mostly lost to still photographers. This is when a portable flash becomes a necessity and takes on the role as your key light. Keeping the shutter speed set to your camera’s maximum flash sync-speed will turn the distracting background elements dark, while the models remain well lit.  But if your goal is to light the models and capture some of the background light effects, you’ll need to drag the shutter (meaning, dial in a slower shutter speed) in order to let some of that ambient light in too.

Even well-lit runway shows tend to have ‘hot spots’ where the lighting is a little brighter or better for photography purposes. Seek out those hot spots and plan to grab the majority of your images when models step into them. They’re usually at each end of the runway, and often in the middle of the length of the runway as well. A typical show will have the models walk on stage and stop to pose, then walk half-way down the runway and stop to pose again. Whether they continue down the rest of the runway and walk off, or turn around and walk back to the beginning, just depends on how the show is organized.

Post-production can be a serious impediment after a runway show. It’s easy to walk out of an event with hundreds (or thousands) of images to pour over, and tweaking each and every shot in Photoshop or Lightroom would be a logistical nightmare. Fast turnarounds are expected, and usually the first photographer to send or share images is the one that gets remembered or hired again.

Shooting RAW format gives us the option to tweak the best shots later and make them picture-perfect. But it’s important to also shoot smaller JPG files that can be quickly and easily emailed or uploaded. Getting your white balance and exposure settings correct in-camera will save you hours and hours of post production work.

The best and most fun images (in this author’s opinion) happen when models momentarily break character or show off their individuality. I’ve seen otherwise stoic models suddenly strike a crazy pose, or flash a big smile or funny face at the audience. Plenty of models love to suddenly spin around in a circle to show the fabric of the garment as it flutters and flows. This typically happens in the middle or end of the runway walk, and rarely ever when a model first appears on stage. But there’s never any advance warning, and it’s our role as fashion photographers to expect the unexpected and capture these fleeting, candid moments. 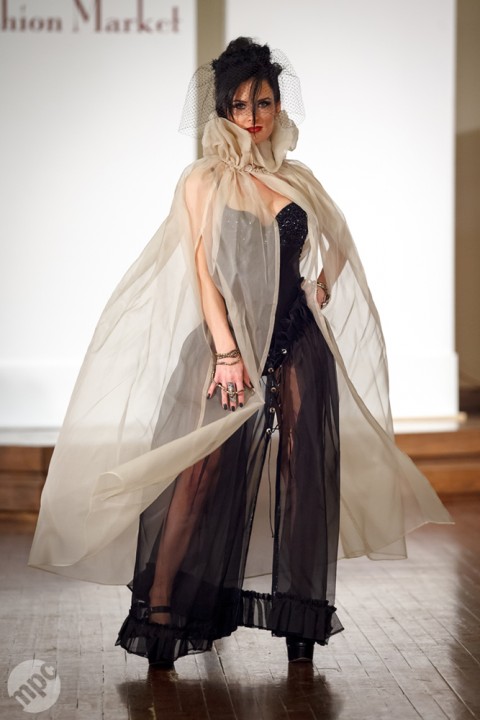 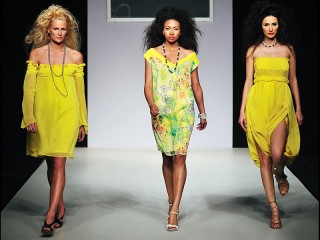