LCD displays on digital cameras are an indispensable tool for double-checking our work. But they can also lead us astray. Dialing up or down the brightness settings can make an image seem over or under-exposed. Messing with in-camera color and contrast settings will influence what we see as well. The only true reality lies in the RAW image files, and calibrated monitors or printers. Fortunately, the histogram was introduced to help us review our work on the fly, and to compare what we see with our eyes to something based more in scientific fact…

A histogram is the graphical representation of brightness values for all the pixels present in an image. Looking something like a mountain range of tonal values, the height of the “peaks” and “valleys” indicates how many pixels are present for any given tone. The far left side of a histogram indicates pure black and shadows, the far right are pure white and highlights. Anything between those two extremes are the mid-tones.

Areas that have no peaks are completely lacking in a given tone. In the histogram below, there is not much shadow detail present, and no pure-black pixels exist whatsoever. This lack of black pixels could be an accurate capture of the scene being photographed, or they could be missing due to overexposure. Without context, histograms and their values are virtually meaningless.

Since the values in our low contrast example are so far to the left on the histogram, it can also be said this is a dark, low-key image. One would expect the content of the actual photo to be something dark in nature, like purple gemstones on a gray backdrop. If that’s not the case, then the image is probably underexposed. By training our eye to identify contrast and brightness in the scenes we’re photographing, we can use the histogram to confirm correct exposure or make adjustments if needed.

Digital cameras are getting better at capturing wider ranges of contrast. But still, consumer cameras do not have have the capacity to capture all detail in a very high contrast scene. The image below is a wonderful example of a terrible sunrise photo. The histogram beside it shows a tremendous gap between the shadows and highlights. Such high contrast and lack of mid-tones is common when shooting under strong back lighting situations with nothing to fill shadows. 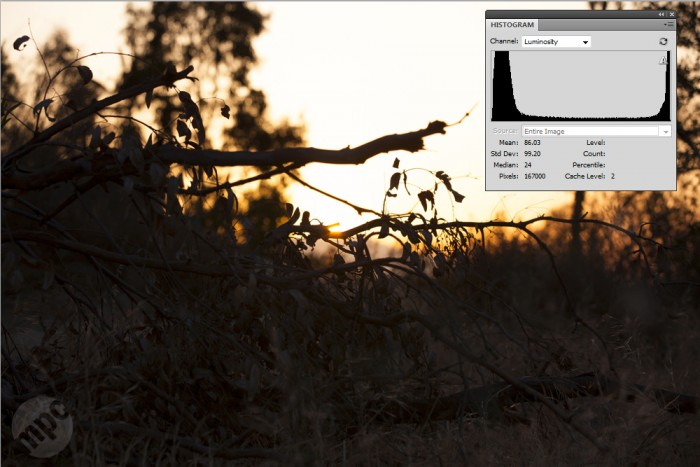 More important to note is how the shadows and highlights in the histogram have spiked so high, they run right off the graph. This is referred to as clipping. Clipping means you’ve pushed your camera’s sensor beyond it’s capabilities, overwhelming it with more data than can be recorded, and something was lost during capture. No matter how much we tweak an image in Lightroom or Photoshop, no amount of post-processing can bring back data that isn’t there. Sometimes, nothing can be done to prevent clipping.  In those situations, we need to decide if we want to expose for shadow or highlight detail, sacrificing one for the other.

PUTTING IT ALL TOGETHER

It can be argued that there is no such thing as a “correct” exposure. Human eyes and brains are adapted to scan a scene and make constant adjustments in order to see maximum detail from shadows to highlights. But what the camera captures is not the same as what our eyes perceive.

To confuse the matter further, artistic interpretation plays a role in which exposure we ultimately choose. Emotional qualities can be implied by underexposing a scene to make it seem dark and brooding, or overexposing for a light and airy feel.  This is important to note because as photographers, we need to not only train our eyes and brains to think and see like a camera, but also to use tools like the histogram to interpret scenes according to our vision. 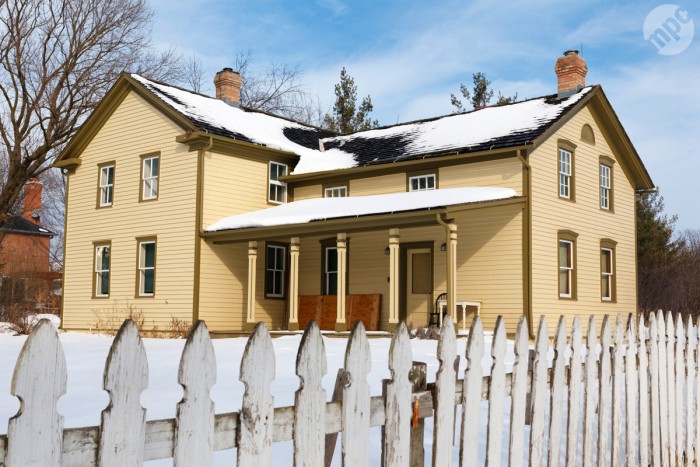 Let’s use this raw image of an historic farmhouse as an example. Examining the photo, there’s oodles of highlights present, from the white snow and picket fence to the fluffy clouds above. The paint on the house is also a yellow color that lies somewhere between mid-tones and highlights. About two-thirds of the tonal range is bright, and that should mean a big spike at the very right of the histogram. After all, that’s how our eyes would see this on a sunny day.

But looking at the camera screen shot below, it seems our whites aren’t quite as bright as they should be? This is where the word interpretation comes into play. 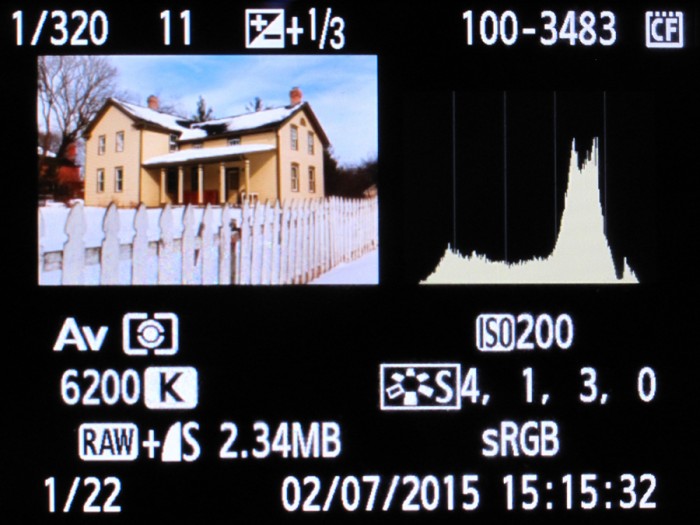 Having photographed this image myself, I can assure you the picket fence, and most of the snow, were actually in light shade that ends just before the building. The only snow that is fully sunlit (and therefore, truly bright and white) are the small patches of snow on the roof. We can see that brightest snow represented as a tiny spike at the very right of the histogram. The biggest spike lies in the lower highlights and upper mid tones, representing all that shady snow and fencing. Since snow acts like a giant reflector, the darkest shadows are filled with bounced light and there’s very little true black to found in this scene. Technically, this is a “correct” exposure. Whether you like it or not… that’s a matter of artistic interpretation.

I predict that within 3 years, digital camera technologies will have progressed to the point where pressing a virtual shutter button on your cell phone will produce the most amazingly high-definition, high-contrast, highly saturated, technically and artistically perfect images. But until that day… it’s probably best to learn to use to use your camera’s histogram. 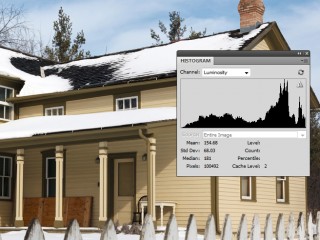