Have you ever wondered how old is your Canon lens? I often get asked if it’s possible to determine the age of a Canon lens. If you buy a new lens from an authorized dealer, the chances are, the lens was manufactured fairly recently. So if you bought your lens new, you have a good idea how old your lens is. However, most people who buy used lenses really want to know how old a lens is without solely relying on seller’s information. The lens’ manufacturing date can give a rough estimate of how long the lens has been in use for, even if you factor in the shipping and warehouse storage times. Fortunately, Canons has been stamping date codes on their lenses since 1960 and you can pinpoint your lens’s production date, if you know how to decode it. In this quick tutorial I will show you exactly how to decode these date codes on older lenses as well as the new serial numbers.

As I have mentioned above, Canon has been placing date codes on their lenses for a long time and previously many lenses had the date code placed separate from the actual serial number. In 1990, Canon started placing date codes on select lenses only. All ‘L’ lenses have them. Click here to see the list of non-L lenses that have date codes post 1990 (if your non-L lens is not on this list, then you are out of luck).  I will refer to these date codes as “the old system.” But starting in 2008, Canon created a new numbering system which incorporates production date, internal repairing code and an actual serial number into one consolidated block. And to top it off, it looks like they’ve reset the date count in the beginning of 2013. I am sure that internally Canon has a nice chart on how to decipher each number on the new serial numbers, but they don’t share it with the rest of us, so we have to make a few calculated guesses. I will refer to these big serial numbers as “the new system.” 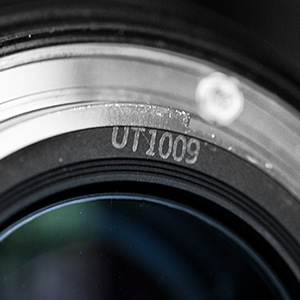 Canon’s old dating system is fairly straight forward, if you know what each letter means. You can find this code on the inner rim of the lens (the side that attaches to the camera). Here is the date code on my trusty EF 24-70mm 2.8L – “UT1009.”

The first letter “U” means that the lens was manufactured in Canon’s plant in Utsunomiya, Japan.  There are three plants which produced EF lenses: U = Utsunomiya, F = Fukushima, O = Oita.  Prior to 1986 this letter was at the end of the date code.

The second letter “T” means that it was produced in 2005. You can tell the year by checking your code against the table below. Canon started with letter “A” in 1960 and got to ‘’Z” in 1985, then they went back to “A” in 1986 and ended the alphabet again in 2011. The reason I know that my lens was manufactured in 2005 and not 1979 (since both are labeled as “T”) is mainly because this lens did not exist back in the 70’s and partly because the factory code is at the beginning.

The next two digits are the month. 01 being January and 12 December. Occasionally, the leading zero of the month is omitted. In my case 10 means October. 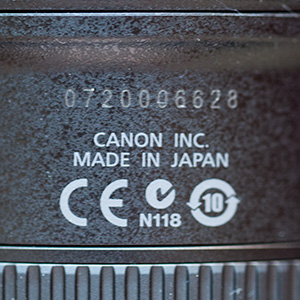 The new system consolidates the date codes and serial numbers into one string of numbers. And this number is now placed on the body of the lens. It looks like this new system was only implemented on lenses that were marketed starting in 2008 and forward. So some lenses that were produced immediately after 2008, but were introduced to the market before 2008, still have the old dating system.

To determine the age of a Canon lens based on the new 10-digit serial number we have to visually break down the number into two, one and seven digits: DD A SSSSSSS

The first two numbers DD correspond to the manufacturing date. It starts in January 2008 with number 38. 39 is February 2008 and so on until December 2012 which is 97. Then Canon reset to 01 on January 2013. Please refer to the table below for all the dates and corresponding numbers.

The next number appears to be for internal use. And the final group of 7 digits is the actual serial number of your lens.

If your Canon lens has a date code then you will be able to tell when it was manufactured. However, keep in mind that the production date is only just that – a date when your lens was made. Lenses can often take a long time to be shipped and then stored in a warehouse awaiting sale. Production date should only be one of the factors determining the extent of how long the lens has been in use for, other factors being the visual condition of the lens and smoothness of operation. 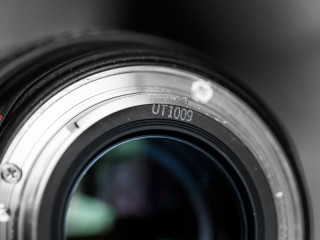