There are few things more gratifying to a swimwear photographer than capturing their subject in front of a sunrise full of dramatic, colorful cloudscapes. When done right, the effect is breathtaking. But shooting at sunrise happens so fast  that it can also be one of the most flustering of photographic experiences. In this article, we will share some hard-earned knowledge and wisdom to bring your sunrise photography efforts a little closer to effortless…

RISE AND SHINE BEFORE THE SUN RISES

The sun rises early… very early. Some of the most dramatic sunrises happen before the sun even comes up. Be prepared to wake up as early as 3 am in order to allow time to pack or travel, or to work on hair, makeup and wardrobe. Look up the exact time of sunrise for the day of your shoot, and be set up and ready to start a few minutes before that. Make sure your model knows this, too.

Early morning beach weather is unpredictable, at best. Rain never seems to pay attention to forecasts of clear skies, wind is always stronger along coastlines, and fog can roll in out of nowhere.

Adding to all that unpredictability: being on the beach before sunrise usually means setting up in the dark. Unless you have a team of assistants to help, do yourself a favor: pack light and work fast. You already have one light source waiting for you on-set: the sun. Adding a well-placed portable flash to that equation can produce great results. Multiple flashes are nice too, but perhaps it’s best to keep things simple and master the basics, first.

In my opinion, the best sunrises are those with big, fluffy thunderstorm clouds, and the sun peaks through them just a little. That light is both direct and diffused, there’s saturated colors, and you can pose your model just about any way you like. You can even compose with the sun directly in the shot and everything turns out great. Too bad we don’t get to pick our weather.

If there isn’t a single cloud in the sky at sunrise, things become more difficult. Shooting directly into the sun produces harsh flare and glare, destroying contrast and ruining the shot. Not only that, you can damage your eyes looking at direct sun through a viewfinder. Using a lens hood helps considerably to control flare. You can also take one of these three approaches to eliminate glare:

1. Position your model so that his or her body is blocking the sun.

2. Shoot at a downward angle.

3. Forget about putting the sun behind your model, and photograph at an angle to the sun instead.

WHICH LIGHT IS RIGHT?

For this style of photography, we want to see saturated colors in the sky. This means using an artificial light source to overpower the rising sun. You will definitely want to use an off-camera light source. It doesn’t matter if you use portable studio lighting or Speedlites, as long as there’s enough power behind the flash.

There seems to be no best light modifier for sunrise shoots. I’ve tried and tested everything from bare flash to large soft boxes, beauty dishes, umbrellas, and anything in between. Whatever you already own will probably do the trick. Just be aware that umbrellas are very good at catching the wind and knocking over light stands. I keep a clip or carabiner on my camera bag, and use that as a makeshift weight to keep light stands from blowing over.

GO BARE (LIGHT, THAT IS) 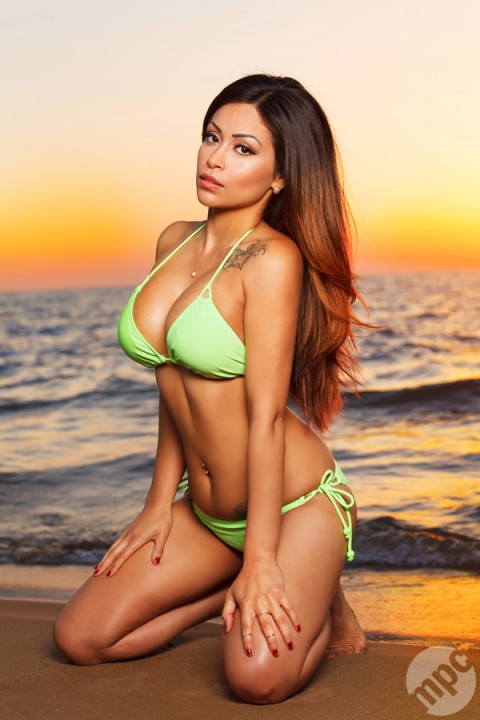 The image of model Veronica to the right was captured using a single studio strobe, fitted with a 7-inch silver reflector (the kind that fits onto a light, not the collapsible variety). That’s a pretty bare-bones approach to lighting. I find myself working with this simple set up more and more because it’s so flexible and portable.  Yet it produces a nice enough quality of light when positioned correctly.

It was a cloudless morning on the day of this shoot, and sun flares were an issue to be addressed. I composed the image with the sun outside the frame, and to the right. The flash was placed at an opposite angle to the left, and I photographed from a point somewhere between the sun and flash.

I often put a diffusion sock over the reflector, to soften the quality of light. Diffusion socks fitted to your specific equipment can be found on eBay or Amazon for only a dollar or two. You can even take the front diffusion material off a soft box and hang it over your light to get the same effect. Heck, in a pinch I’ve been known to put a white plastic bag over my silver reflector.

SAVE THE DRAMA FOR YOUR… SOFT BOX? 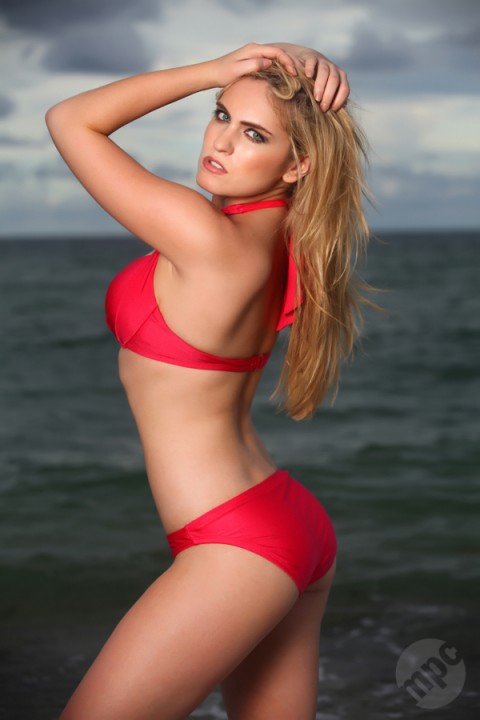 On gloomy mornings, we can’t be lazy and rely on amazing cloudscapes and colors to create amazing images. So we need to work a little harder to produce dramatic effects with lighting instead. And that’s when I break out the soft boxes.

Working with a soft box close to model Jax and at low power added contrast and detail. In the image to the right, that sky wasn’t actually quite as dramatic as it seems. I added a polarizing filter to squeeze out as much color and contrast as possible. I also underexposed the ambient light to make the background more dramatic. And then used a medium rectangle soft box on the strobe, about four feet away from the model and as close to straight-on as I could get away with. Not too shabby, considering this was an otherwise dull sky.

SET IT AND FORGET IT

If you’ve never seen the sun come up over open water, I can assure it happens fast. Sometimes, there’s only a few minutes to get the shots you need before the sun has traveled too high on the horizon. Your exposure settings can change every minute or two in the beginning. And it can get frustrating, fiddling around with flash power, aperture, ISO and shutter speeds all at once. It definitely helps to reduce variables whenever you can.  So I always recommend you pick an aperture you like, then set it and forget it for the rest of the shoot.

Working outdoors with a flash or strobe means juggling two different exposures: one for the flash and model, and one for the background and ambient light.

It’s best to first find your ambient exposure for the background. You can use automatic exposure modes like Auto, Program or Aperture Priority and meter from a middle-toned area of the sky.  Don’t include the sun directly in your exposure test shots, or you will get bad results. A little underexposure can really make the colors in the sky pop.

Automatic metering modes will fail miserably thought when shooting with a flash and back-lit model.  So switch to full manual mode and dial in the settings from your ambient exposure test shots. Then turn on your flash or strobe to fill in the shadows on the model.

You can use a light meter to set your flash exposure, but I find bringing an expensive meter to a wet and sandy beach is an accident waiting to happen. Instead, I have the model hold a white balancing card, and I’ll begin with low flash power and grab a test shot. Reviewing the results on the camera display, I dial up power as needed, and review more test shots until everything looks right. Trial-and-error usually gets the correct exposure within three or four test shots, if you know your gear.

BRING A BAG… AND A TOWEL

These last tips have nothing to do with lighting or photography. They’re more of a kind head’s-up to remind readers that being on the beach so early means: being there before anyone has cleaned up yesterday’s messes. Beaches can be dirty, filthy places at five in the morning.

A garbage bag comes in handy for removing nasty things that wash up on shore, or have been left behind by careless people. I can’t even being to tell you how many beer cans and cigarette butts I’ve picked up over the years. It’s not that I’m a neat freak… I just don’t like the idea of pretty models posing in front of discarded dirty diapers.

And rarely does anyone think to bring a towel, even though that’s something you would normally do at the beach any other time of day. You can put your gear down on a towel to keep wet and dirty sand out of everything. A large towel can also work as a makeshift changing room for models when no cover is anywhere in sight.  We’ve used towels to warm up models on cold mornings, or thrown them over lighting equipment when rain appears out of nowhere. To misquote The Hitchiker’s Guide to the Galaxy: a towel is about the the most massively useful thing a photographer can have.

Despite the odd sarcastic comment or cautionary warnings in this article, I guarantee that shooting at sunrise on the beach is also one of the most FUN genres of photography you can attempt. And a good sunrise shoot produces images that will having you beaming with pride. For more hard-earned beach photography wisdom, be sure to check out our companion article: Sometimes, the Sunrise Never Rises… 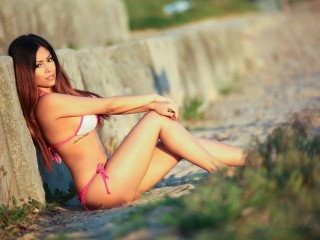