So much attention is invested into Photoshop skin editing techniques, perhaps at the expense of attending to other issues that are as equally important.  Heavy-handed skin filters and blurring actions have a bad habit of destroying detail and reducing overall contrast in an image, producing unrealistically glamorous “Barbie Doll” skin.

But what if your subject needs to look more like a real human being?  For this tutorial, I’m going to ask you to leave the skin alone and instead, focus on correcting lighting issues around the forehead, eyes, nose and chin.  These areas are roughly referred to as the “T-Zone” of a face, and a little well-placed brightening or darkening there can draw an image viewer’s attention away from skin and hair issues. 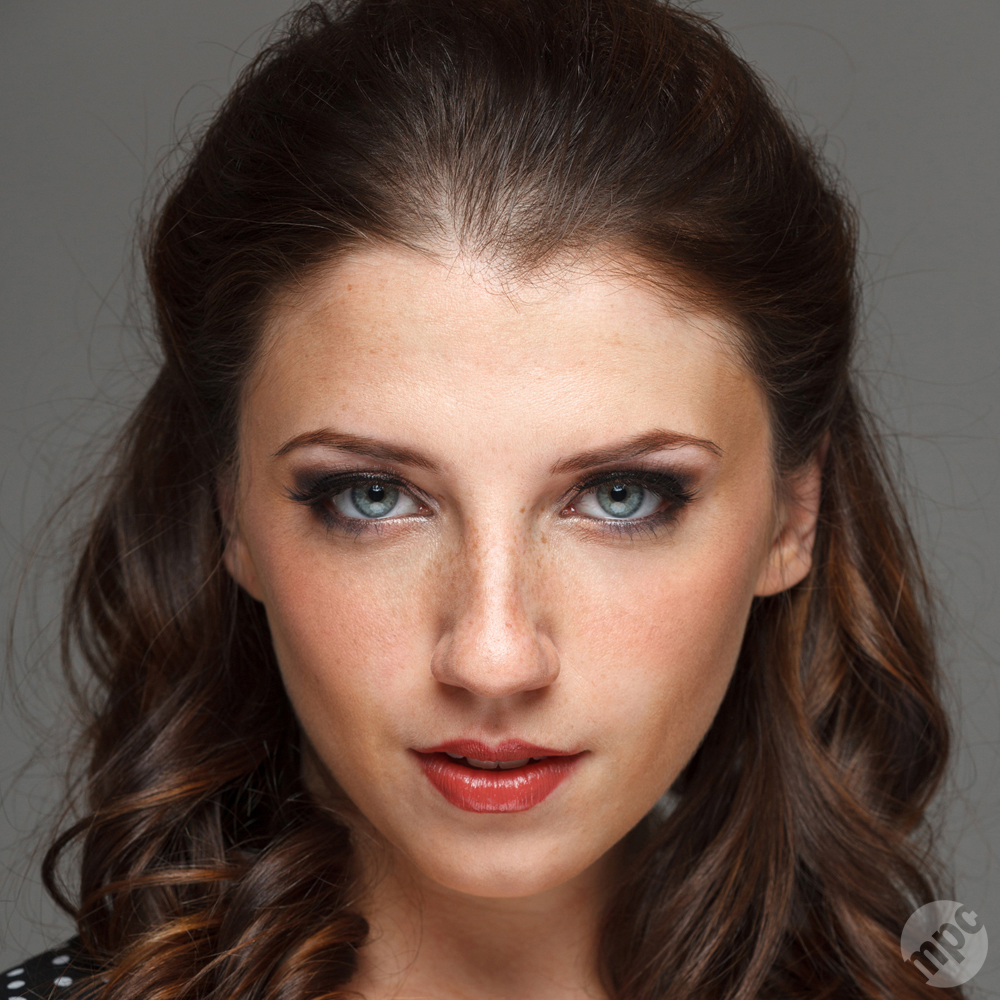 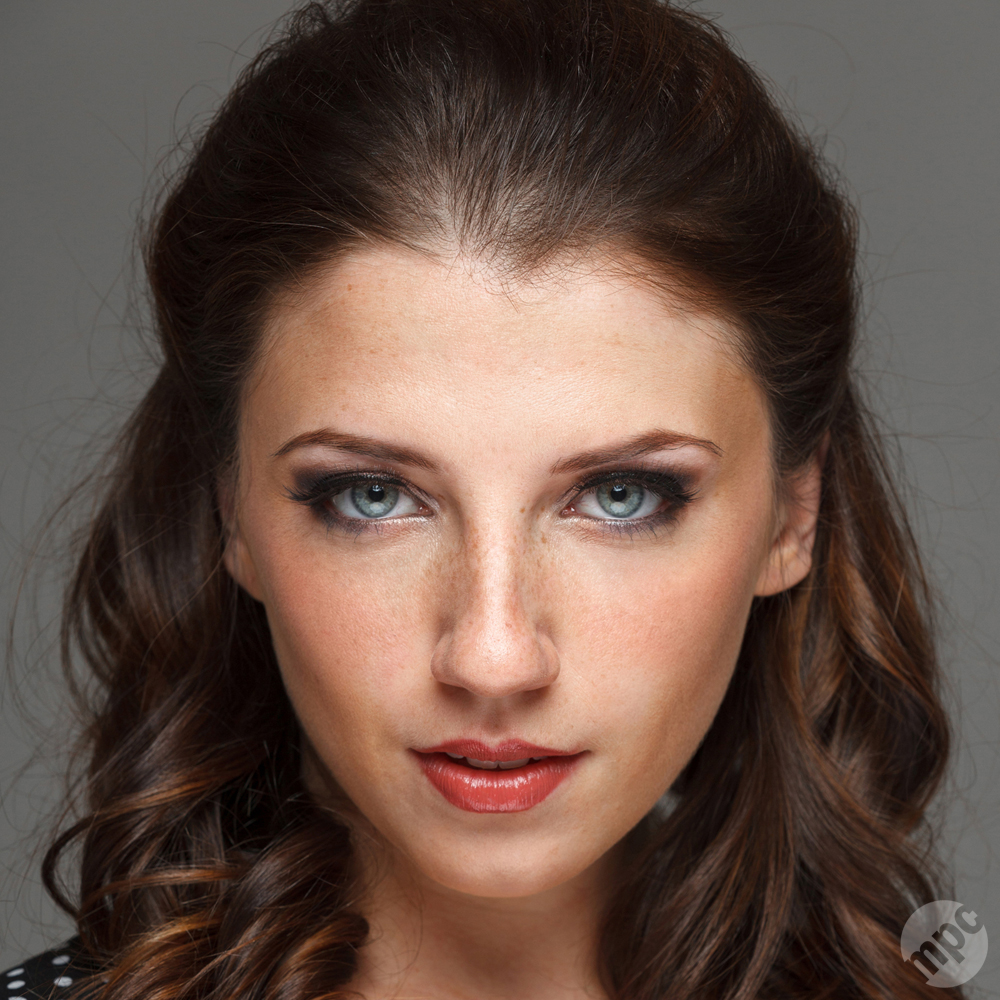 We’re going to apply subtle corrections by using Adjustment Layers, Layer Masks and Levels to change the brightness and darkenss of the T-Zone areas. For readers who are unfamiliar with working on Layers, these are some of the most important and powerful tools in your Photoshop bag of tricks. You can check out our tutorial on Adjustment Layers here.

Begin by clicking on Adjustment Layers > Levels to create a new Levels Layer.  You will be prompted by the New Layer window that allows you to name your new layer and establish other settings.  Go ahead and click OK and you should now have a new layer named “Levels 1” in your window pallet to the right of the screen.  If you don’t see the Layers pallet, or Adjustments above that, they can be added by clicking Window > Layers and Window > Adjustments from the menus at the top of the screen.

The graph in the Adjustments window is called a Histogram, and the black areas in the graph are a visual interpretation of the blacks, mid-tones and brightness of your image.  The small black, gray and white triangles below the histogram can be clicked and dragged left or right to change brightness and darkness. As you make changes, they will be reflected in the numerical values below.  The default values are 0 for pure black, 1.00 for middle gray and 255 for pure white.  Make sure that “RGB” is selected from the drop down menu above the histogram, so that we are making changes to the entire tonal range and not just one selective color. 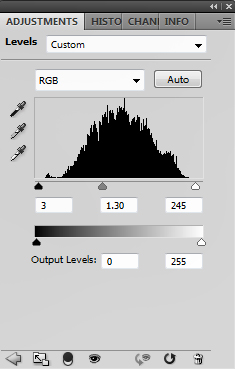 Our first goal is to lighten the shadows and enhance highlights in and around our subject’s eyes.  Begin by clicking and dragging the mid-tone (gray) slider to the left and you’ll see the image brighten. The specific output values used will vary depending on the image you’re working on, as well as personal tastes.  For our tutorial image, we increased the mid-tones setting from 1.00 to 1.30.

Next, grab the (white) triangle slider and drag it to the left to brighten the highlights.  We changed white from 255 to 245.  It’s very easy to over-expose the highlights this way (also known as “clipping”) so be subtle in your approach.

You may not need to play with the black values at all.   If the pupils aren’t black, then drag the black triangle slider to the right to add more darkness  Otherwise, leave things right where they are. 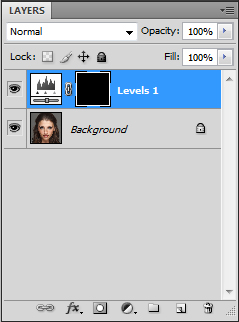 The effect we just created may may look terrible when applied to the entire image.  So now we want to hide the effect with a black Layer Mask.  If you’re new to this, Layer Masks are filters used to reveal or conceal the contents of an individual layer.  A black layer mask hides a layer and then a white brush tool is used to selectively paint the effect back in only where it’s needed.  A white mask is the opposite, revealing the layer and a black brush is used to paint out the parts we don’t want shown.

Your “Levels 1” layer should already have a white Reveal All layer mask (the white rectangle next to the layer’s name).  If so, then click Image > Adjustments > Invert to change this to a black Hide All mask.  If you don’t see a black mask there, then click Layer > Layer Mask > Hide All.  Click on the black rectangle in the layers pallet to make sure you’re painting on the mask, and not the layer itself. 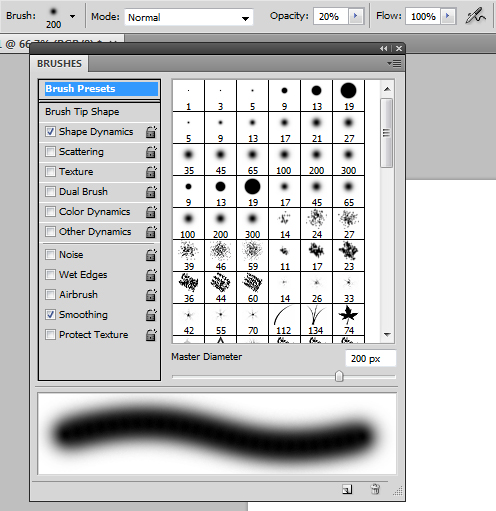 Select a white Brush tool with a soft, feathered edge and begin with an Opacity of 20% or less.  The Brush Size should be large enough to cover a little more area than from the eyebrow to the lower eye lid.  Paint just around each entire eye.

Now, decrease the size of your brush so that it is the same size as the Iris (colored part of the eye).  Using these settings, click once on each Iris to brighten them a little more.

If the lip color seems too dark, you can use the current brush to paint once or twice over the lips as well.  Being sloppy is okay, as long as you paint within the lip lines.  The soft edges of the brush will make sure everything blends realistically.

Last, decrease your brush to one-half it’s current size.  Note where the catch light is in the subject’s eye, and paint once or twice on the opposite side of the iris.  In our example, the light was from above, producing a catch light in her upper pupil.  We painted the bottom of the iris to create a highlight that is more realistic than if we had just indiscriminately brightened the entire eye.

If there are dark areas in the lower lids or under the eyes, you can also use these same brush settings to paint around in there and lighten them.  I find most subjects need a lot of brightening under the eyes.

If you’ve seen a Gladiator movie where the six-pack abs have obviously been painted on, then you know what can be accomplished by adding shadows. Professional makeup artists call this “contouring” and it’s used to add shape and dimension where none exists.  We’re going to do the same, by adding shadows under our model’s chin or darkening bright highlights to draw attention back up to the lips and eyes. 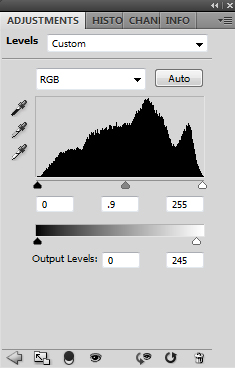 Once again, you’ll want to create a new Levels Adjustment Layer.  This time, we’re only going to move the mid-tones slider in the Histogram area, setting ours to a value of 0.90.

If you look below the histogram area, you’ll also see a grayscale bar with only two sliders (black and white).  These produce the opposite effect of their counterparts above, and moving it’s white slider left will darken highlights.  Drag the white slider until the value changes from 255 to something like 245.  If you move it too much, the skin will start to take on a waxy and unrealistic look.

Add a black layer mask and select the white brush tool again.  You’ll want to set the Opacity lower for the next steps, around 10%.

Shiny legs and arms may look great on an oiled-up bodybuilder, but shiny faces are a distraction.  This is especially true with foreheads, drawing all the attention where it doesn’t belong.

With your white brush tool and black layer mask selected, target the brightest spots on the forehead first, usually along hair lines.  The part in the hair is often overlooked in image editing.  But once you pay attention to how bright and distracting parts can be, you’ll wonder why you never noticed this before.

It’s better to paint with a low opacity brush and using lots of brush strokes, to create subtle and realistic transitions. Paint down into the middle and lower forehead, but be sure not to brush out too much brightness directly above the eyebrows in order to maintain some definition in the T-Zone area.  You can also paint lightly over the bridge of the nose if there’s too much glare there.  I prefer to leave a little shine on the ball of the nose for interest.

Last, we want to really push the viewers attention to the center of the face by adding shadows under the chin and around the edges of the cheeks.  Using your same white brush at low opacity, paint from one ear to the other, circling around the jawline and making sure not to spill over too much on the skin of the face.  You’ll probably need a few passes, and more shadow produces more dramatic results.

Like any new skill, these methods may require time and practice before they become second-nature.  But once they do, I assure you all the steps outlined here can be done in under 2 minutes.  Be sure to check out the before-and-after versions of our tutorial image to show just how much a little selective brightening and darkening can impact your images. 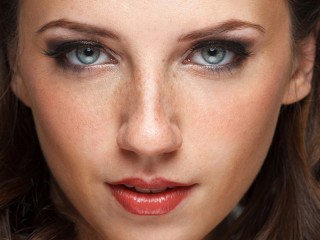