The Carl Zeiss Vario Tessar T* FE 24-70mm f/4 OSS ZA is a premium quality lens in general focal length category for Sony A7 full frame E-mount camera lineup. This lens can keep a constant f/4 aperture throughout its zoom range. It’s dust/moisture resistant, offers good overall image quality and has a solid built structure. Since at the moment Sony has a very limited lineup of full frame E-mount lenses I would say that this is THE lens to have for landscape, travel and event photography for your alpha 7 camera. I have played with this lens for about 3 weeks on Sony A7 II body, but in this review I am not going to go much into technical details since I have not actually gone through the effort of testing every single aspect of quality and distortion at different apertures and situations. But I think I’ve shot enough images with this lens and have been in enough different situations to notice all key performance aspects of this lens. I want to mostly focus on overall feel of this lens and my personal thoughts about it, as well as compare it to the kit lens that share the same general category. 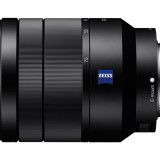 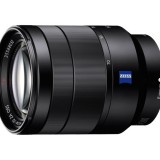 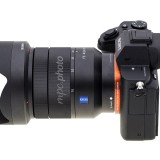 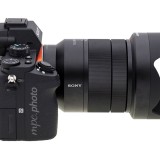 Help us support this website.
If you plan on purchasing
this camera, why not use our affiliate link below:
Get Sony Carl Zeiss Vario Tessar T* FE 24-70mm f/4 OSS ZA Interchangeable Full Frame Zoom Lens from Amazon right now.

This lens’ full name is Sony SEL2470Z Vario-Tessar T* FE 24-70mm F4 ZA OSS, it seems that these days they are just throwing alphabet soup noodles at the wall and see what sticks. I, of course, know that each term means a certain coating or feature, but come on. Anyway Sony FE 24-70mm f/4 is relatively small (73×94.5mm) and lightweight (430g) lens. Although when it sits on Sony A7 or A7r it still makes the camera a bit front heavy. However, when it’s mounted on A7ii with its redesigned body and grip, this lens feels right at home. It’s not the lightest lens out there, but I had no problem carrying it around for days.

Built quality of this lens is excellent. It feels solid. The zoom ring is tight, yet very responsive. The focusing ring on the other hand is less tight. This lens has a focus by wire, so it doesn’t feel as responsive as I would have liked it to be, but you get used to it pretty quick. Focus by wire means that it’s not mechanically connected to the focus drive system, but rather sends a signal to the camera first, which in turn moves the focus. Because of this, the lens can respond to the speed with which you turn the focusing ring. Fast turns will quickly move it to infinity, while slow motion will give you more precise adjustments. To put it in plain terms, if you rotate the ring 30 degrees quickly it will go from 40cm to infinity, but if you do a 90 degree turn slowly, the lens can go from 40cm to 50cm focusing distance (depending on the speed of your turn).

Sony FE 24-70mm f/4 is also weather resistant, which is great since it’s best used outdoors. Its hood is compact yet solid and snaps nicely into place. Unfortunately it doesn’t zoom internally; its front element sticks out as you go toward 70mm. Filter thread is metallic and measures 67mm. 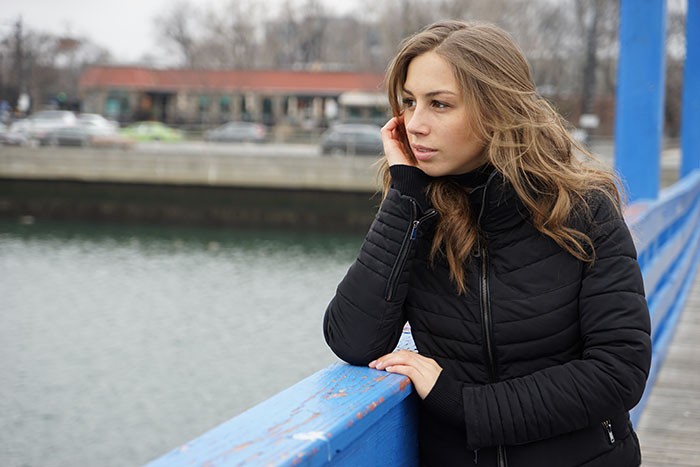 When Sony FE 24-70mm f/4 OSS ZA is paired with A7ii body the autofocus is very fast. It gets slightly slower when shooting in darker situations, but the difference is negligible and you probably wouldn’t notice it much. This lens also has a built in optical stabilization which is a bit surprising considering its relatively small size. Stabilization works well and compensates for f/4 aperture in low light environment giving about 2-3 stop equivalent.

This lens creates some optical distortion virtually at all focal lengths. If you are shooting in JPEG only, you will probably not notice any of these distortions since they are being automatically corrected in camera and as far as I know there is no way to disable that. However, if you shoot in RAW and disable automatic correction in post, you will see some straight lines being distorted. But if you have distortion correction enabled you will probably never see this problem and wouldn’t even think about it. 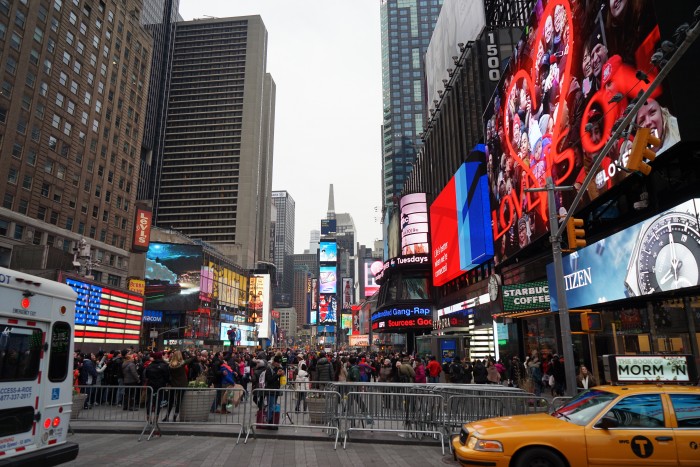 The sharpness of this lens is good overall. It’s not all that great at 24mm especially in the corners at f/4. In fact at 24mm corners stay somewhat soft until f/11. Also at f/4 corners are soft on virtually any focal length. The center typically stays nice and sharp until you get to 70mm where the entire frame gets a bit softer, especially at the center. Other than these extremes this lens is sharp and will serve you well for general purpose shots. There is also some vignetting at f/4, but as soon as you go to narrower apertures it disappears. I haven’t noticed any fringing at all, which is very surprising, but then again I haven’t tested for that specifically. 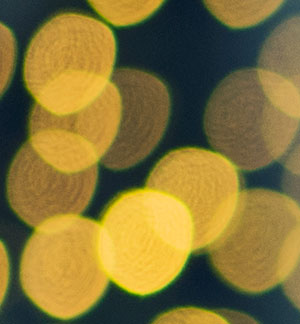 Bokeh is referred to how out of focus areas look like. It’s a very subjective topic, but to my eyes bokeh on this lens is not that great. The lights are not perfectly round but have a slight hexagon shape to them and sometimes they also have a cut onion effect where you see rings inside some lights. Even at f/4 I can see that the aperture blades don’t open all the way on this lens and that’s probably what makes the highlights have that slight hexagon shape.

Now the biggest question is Carl Zeiss Vario Tessar T* FE 24-70mm f/4 OSS ZA worth its value. Overall it’s a very nice lens. It definitely has a premium feel to it, yet its portable enough for travel photography. The stabilization is also an excellent addition. However, Sony has priced this lens at $1300 (you can often find it for $1200 these days) and I have a hard time accepting this price point. If you compare it to Canon 24-70mm f/4 IS lens that is currently $900 with additional $100 mail in rebate, the price anchor gives you a nice perspective on things. The Canon lens is bigger and heavier since it’s made for DSLRs, but its image quality is a slightly better. Technically you can even use this Canon lens with an adapter, but I wouldn’t recommend it. So that leaves us with Sony FE 24-70mm f/4. I do wish it was f/2.8, but then it would be bigger and would fall in a completely different category. Thus it all comes down to your budget and what you plan on shooting with this lens. If you just want to do landscape and travel photography and have enough money to get this lens I would say go for it. You would rarely need anything wider than f/4 shooting outdoors and the small form factor is bliss. However, since I shoot people most of the time I found myself taking a few shots with this lens and then reaching for Carl Zeiss Sonnar T* FE 55mm F1.8 ZA and taking most of the shots with this prime lens instead. Of course almost every photographer needs to have a general focal length lens such as this FE 24-70mm f/4 OSS ZA. So if you have a Sony full frame alpha body camera and need this focal length go for it if you can afford it, if not try to get it used (it is built well enough to last decades) or look into 28-70mm F3.5-5.6 OSS.

If you own or plan on buying Sony A7, A7r, A7s or A7ii cameras you probably know that they have a very limited lineup of lenses that would produce the best quality/autofocus performance from these E-mount full frame bodies (especially at 36mp). Some might argue that you can use other lenses with adapters but I don’t want to open that can of worms in this review. If you want to stay with native lenses in the general purpose focal length category, you have 2 lenses to choose from: FE 28-70mm F3.5-5.6 OSS or FE 24-70mm F4 ZA OSS. The former lens costs around $300 when included as a kit bundled with a camera. FE 24-70mm F4 ZA OSS, on the other hand, can set you back a whopping $1300-$1200. So is it worth upgrading to this premium lens?

It all depends on what kind of photography you will be shooting most of the time. Both of these lenses are OSS (Optical SteadyShot) meaning they have stabilization built in. Both of them have similar focal length, although you’ll be surprised how much wider 24mm is from 28mm on a full frame sensor. But FE 28-70mm is lighter, smaller and has an internal focusing system. Sure its quality is not as good as FE 24-70mm and it has a variable F3.5-5.6 aperture. But is FE 24-70mm four times better to justify 4x the price? I personally don’t thinks so. If you just need a nice and light outdoors lens for travel then the kit lens is good enough. But if you are looking for a premium lens with slightly faster aperture, better sharpness and contrast at 4x the cost, go with FE 24-70mm.

Help us support this website.
If you plan on purchasing
this camera, why not use our affiliate link below:
Get Sony Carl Zeiss Vario Tessar T* FE 24-70mm f/4 OSS ZA Interchangeable Full Frame Zoom Lens from Amazon right now.
If you have enjoyed this post and wish to receive updates about any future posts like the above subscribe, like and follow us!
This entry was posted by Alex Gumerov. 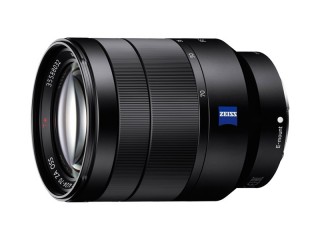