GoPro Hero4 session is a smallest sibling in the Hero line of action cameras. It’s capable of taking 1440p videos at 30fps as well as 8mp photos. Moving away from the rectangular shape that requires separate water enclosure, Session has a smaller cube shaped body that’s fully waterproof (up to 33 feet) on its own. This is a welcome change especially for those action minded folks who felt that the original bulky body was cumbersome and too awkward. Unfortunately, such a drastic change in size and design doesn’t come without some sacrifices. I have been putting the new Hero 4 Session throughout some vigorous testing for the past few weeks and this review would focus on my findings and thoughts about this camera. 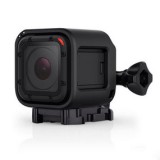 Help us support this website.
If you plan on purchasing
this camera, why not use our affiliate link below:
Get GoPro Hero4 Session from Amazon right now.

Size. Those who know GoPro Hero cameras know them by their trademark rectangular grey body that used to house in the front a small screen and button. Let’s face it; it’s not the most aerodynamic shape out there. Not only does it look goofy when mounted onto a helmet, but it can actually throw your balance way off. The new Hero 4 Session radically steps away from this design in favor of a more compact cube form. While the cube form itself is not technically aerodynamic, the Session is 50% smaller and 40% lighter than previous Hero models and thus it is noticeably more adapt to all kinds of fast pace action. It now measures at 1.5 x 1.43 x 1.5 in / 3.81 x 3.63 x 3.81 cm and weighs just 2.6 oz / 74 g.

Feel. As I have mentioned earlier, the body itself is now fully waterproof, so there is no need for an additional case that encapsulates the unit. The body of Hero4 Session is covered in rubber that has a nice slight ribbed textured feel to it, so if you are hand holding it in your hand it will be less likely to slip. However it’s much more prone to scratches. The front of the camera, on the other hand, is all glass with a metallic rim going around it. I suspect the metallic rim also acts as a heatsink that cools off the processor and therefore gets really hot when camera is in use. In fact, if you’ve been recording for longer than a few minutes, the rim gets so hot that you can easily sustain a minor burn, especially if you have very sensitive skin. 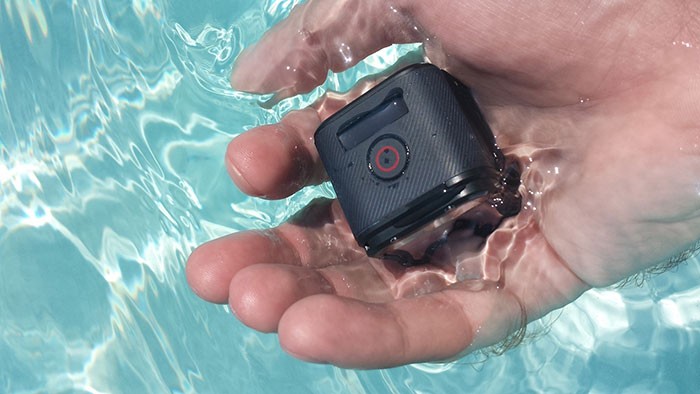 Controls. Unlike the previous models, Hero 4 Session only has 2 buttons. The main button is situated right on top and acts as the main record button. As single press will start video recording, while a 3 second press starts a time-lapse capture. The camera essentially turns itself on when you start capture and off when you finish it, meaning that it now takes a little longer to start recording, on average about 4 seconds to start recording after the button is pressed. This is a bit disappointing because a lot can happen within those 4 seconds, especially so when you’re shooting action. The other smaller button is located in the lower back of the unit and acts as setting info toggle and Wi-Fi control. 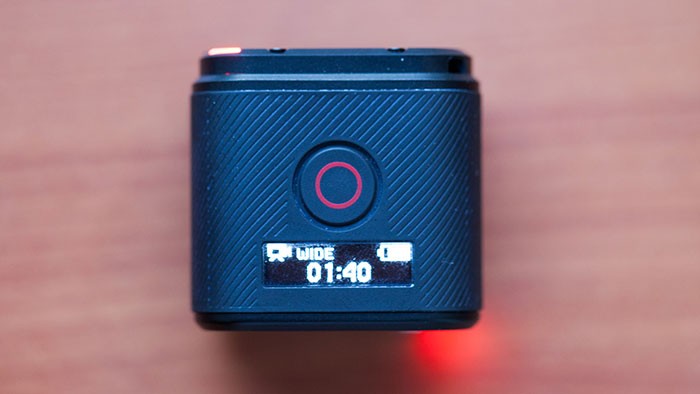 Info screen. Hero 4 Session now also features a new display. It’s a bit smaller than the original, but new LED is a huge improvement. The screen is so bright that in my testing I’ve never had a problem reading it in complete darkness or direct sunlight. As with majority of Hero cameras, Hero 4 Session does not have a preview display screen and no attachment screen support, so if you want to see what you are filming you’ll need to use GoPro App on a mobile device.

Built-in battery. Another big design change Session has undergone is the built-in battery. You can no longer replace batteries on the go. Once the charge is depleted you need to charge the unit which means it will be out of action. I suspect this is why GoPro called this model Session.

Microphones. There are two microphones built into the body, one on the front and one on the back. There are groves cut in the microphone holes that let the water escape quickly for better performance. The front metal rim around the camera also has a small loop around one corner through which you can attach a small wire if you wish to have a backup secure fastening.

Ports. One last thing to mention is a side door that’s tightly sealed from the elements. It covers a USB Micro-B and Micro SD slots. The unit is charged via USB port, which you can also use to transfer files at USB2 speeds. The Micro SD slot goes into the body at awkward 45 degree angle to avoid the lens barrel. It feels a little perplexing when your memory starts to go into the slot at an that angle, but do not worry as it was designed this way to save some space. 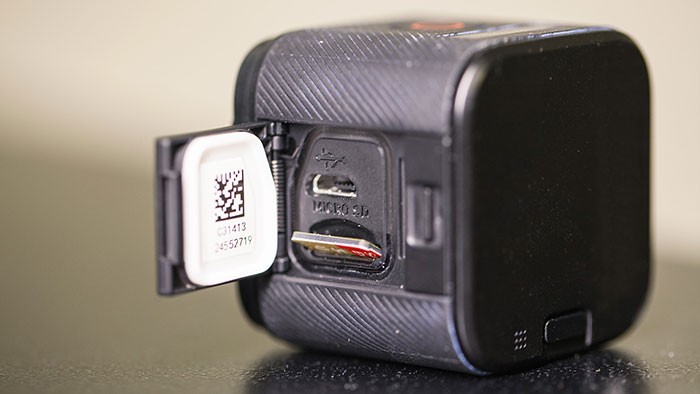 Resolution. We can all agree that the design changes on this camera are quite good, but the big question is: did they improve image quality and performance as well? The short answer is No, they did not. GoPro Hero 4 Session can shoot at a maximum resolution of 1440p / 30fps, that’s a 4:3 aspect ratio. If you want to shoot at the standard 16:9, then its max is 1080p at 60fps. While that might be acceptable to some people who are not shooting anything higher than 1080p, but it’s a bit disappointing for many of us who already have GoPros that shoots at 4k.

Frame Rate. Hero4 Session is also weak in the high frame rate department. 60 frames per second in HD is acceptable, but not great. It can also do 100fps at 720p. And if anybody cares, it can do a “whopping” 120fps at 480p. Image capture resolution is limited to 8MP (3264 x 2448). At the current MSRP this camera is selling for this performance is very underwhelming.

Image Quality. Now let’s talk about the actual image quality. If this is the first GoPro camera you have ever shot with, you might be satisfied with the results. But if you compare it to Hero 4 Silver (that’s currently priced the same as new model) you will notice that Hero 4 Session is not as sharp and the dynamic range is much weaker. Session tends to soften finer details and quickly loses quality in shadows. Low light noise is as bad as the previous models, although Session often tends to lean towards warmer white balance in such lighting. Just like previous models Session also supports Protune, that’s more of a RAW format that lets you tinker with Color Balance and ISO settings as well as post color grading. In normal mode, the camera captures in H.264 and breaks longer clips into 12min segments.

Settings. Since Hero 4 Session only has two buttons you’ll have to use GoPro App to review your footage and change settings. I will not go into much detail about the app in this review, but it’s the same one you would use with all other Hero cameras. You can change resolution, frame rate, time-lapse image interval and preview live view footage (with ~1 second lag), as well as watch recorded clips and much more. It does this by creating a Wi-Fi hotspot which you can connect to from a mobile device.  Session can also connect to a remote (sold separately) via Bluetooth. As I have mentioned before, hitting record button on the camera body will start the recording about 4 seconds late, since the camera need to turn on and initiate. Once you press the button again it turns itself off to conserve battery.

Battery performance. Speaking of battery, Hero 4 Session has a completely sealed 1030 mAh battery. By eliminating standby mode GoPro has actually been able to make this battery last a while. Officially they claim that it can last up to 2 hours, but in my real world testing I averaged 1 hour 45 minutes on HD video recording. Recording with Wi-Fi on, the battery lasted about 1 hour 39 minutes. This is pretty phenomenal performance for such a small battery, but keep in mind that once the battery is dead you can’t replace it and need to charge the unit itself. Depending on how you are using the camera, you might be able to connect it to an external battery (if you own one), but once you open the side door the camera is no longer waterproof.

Audio. I am not proficient in audio so I can’t qualify myself to be a good judge of its quality. But I would say that the audio quality is noticeably better on Hero 4 Session than all its predecessors, since there is no casing blocking it. It seems to be a lot better underwater as well. 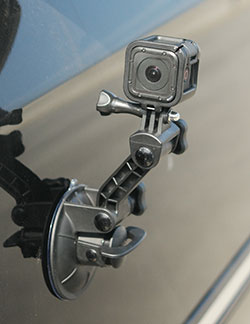 GoPro Hero4 Session comes packaged with 2 frames, standard and Low Profile frame. Both of these are fully compatible with all previous GoPro accessories. This is a huge relief since I have tons of different accessories and it would be a shame if GoPro changed their mount on this model. The low profile frame is actually pretty nifty and very versatile. Since the Hero4 Session is cube shaped it can now be flipped in the frame and mounted sideways. However, because its cube shaped I can also see many people accidentally holding it sideways and getting vertical videos. Hero4 Session also ships with a Ball Joint Buckle that can be twisted to a desired angle. Unfortunately because of its new shape it is no longer compatible with my 3-axis motorized stabilizer, so I will keep using my Hero4 Black for that.

In the case of Hero4 Session, it’s all about form vs. function. If you didn’t like previous Hero models because of its bulky size, wide shape and annoying enclosure – then this new design should be a much better fit for you. However, if you were looking for an improved quality over the previous models, you will be disappointed. I would also like to talk about the value of this product. Hero4 Session is currently on the market for MSRP of $399, which is the same price as Hero4 Silver edition. Hero4 Silver can capture at higher resolution with better quality. It also has a touch display that you can use to preview footage as well as a swappable battery. So in a sense you are paying a premium for a smaller and lighter form factor. I personally feel that Hero4 Session is currently overpriced. At the rate they are currently pumping out new cameras I bet a new Session mk II will be out next year, boasting much better specs. So unless your shooting style requires you to use such a small camera, I would recommend skipping this particular model and waiting for an update, or purchasing Hero 4 Silver instead.

Help us support this website.
If you plan on purchasing
this camera, why not use our affiliate link below:
Get GoPro Hero4 Session from Amazon right now.
This entry was posted by Alex Gumerov. 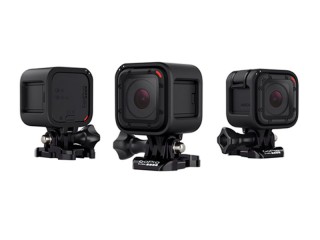