Hero 4 is the newest in a lineup of a popular action cameras from GoPro. These cameras have been gaining popularity for quite a while now and at the moment they are the go to gadget for action sports, stunt, aerial and virtually any other kind of image capture where weight and size plays a major role. We have been using various Hero cameras for some of our behind the scenes videos as well as stop-motion and underwater photography. They are simply amazing, considering their size and price point. Previously I have been saying that if you don’t really have a use for these cameras there is no need to own them and it might be better to wait for another iteration. Well that time has come. I think that the Hero 4 lineup is where everyone needs to jump in and buy one. Read my full review to find out why.

I’ve owned Hero 2s, Hero 3s and 3+ over the past couple of years. Their quality was good in daylight, but crappy in darker situations. They had no LCD screens and you basically had to shot from the hip and hope you’ve got the composition right. I have done diving, driving and aerial videos with them and they have always served well for a B-roll footage. In fact, one of my Hero cameras died after 60 foot drop when a malfunctioning drone lost one of its propellers and the camera ended up drowning in a pool. That’s the kind of death my other cameras can only dream of.

But now, I think, GoPro Hero 4 line up has something for everyone. The black edition is now fully capable to film all our main footage as well; it even offers full 4K resolution while most of the recently released mirrorless and DSLRs still don’t.

4K resolution. Hero 4 Black is GoPro’s flagship camera. While its predecessor was able to capture 4K resolution, it was limited to 15 frames per second, which is unusable for normal video production, unless you intent is to double the speed and make everything look faster than life. Hero 4 Black, on the other hand, is now capable of capturing full 4K at 30 frames per second and 2.7K at 50fps. That’s a big deal. You might say “But I don’t need to shoot 4K since there are only a handful of TVs that support it.” The reality is, you always want to capture at the highest quality possible. Majority of TVs going for sale this year will support 4K and in a year or two we will all be watching movies, sports and shows in 4K. Another reason you might want to shoot 4K, is the ability to crop in post processing. In order for Hero 4 to capture close quarters Point Of View shots, the camera has a wide angle lens built-in. In fact, there is a SuperView option, as GoPro calls it, which gives it even wider, almost fisheye view, without the fisheye distortion. Sometimes you might want to “zoom in” and that’s where a crop might come in handy. If you have a significant camera shake, you can also shoot in 4K or 2.7K and then stabilize the shot in post processing and have a smooth 1080p video. Here is a 4K video footage I’ve shot in Costa Rica. It doesn’t show full beauty of 4K since YouTube heavily compressed it for streaming, but you can still check it out.

120 frames per second. The upgrade I am most excited about in the new GoPro Hero 4 Black edition is its ability to capture full HD 1080p in 120 frames per second. It still boggles my mind that this tiny camera can film sharp video at such high rate. There are virtually no other cameras on the market that give you this much versatility (iPhone 6 can capture 720p at 240fps). Of course, the good has to come with the bad. To achieve these capture option, GoPro makers had to use a high performance processor, which uses a lot of power and gets pretty hot. In my experience, shooting 4K at 30fps completely drains the battery in about an hour (without wifi or Bluetooth on). Oh, and to go from bad to worse, GoPro has redesigned the battery, so if you have batteries from previous models like I do, they won’t fit. Overheating is another major problem with this camera. I have discovered that shooting in a warm climate with the camera in its water sealed case will heat the camera drastically. It heats up to a point where the ring around the lent gets too hot to touch. And the camera gives a overheating warning and automatically shuts down after about 25-27 minutes of continuous shooting in 4K at 30 fps. However if you are shooting at full HD 1080p at 60fps the camera will be warm to the touch after a while but will not overheat. So the overheating issue only comes up when the camera is capturing at its top performance levels for a while. I have found myself shooting bursts of clips with each being no longer than 5 minutes and I’ve encountered no heating issue at these scenarios. 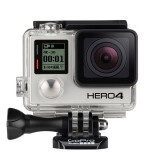 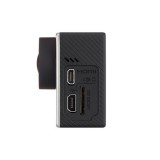 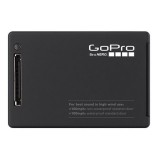 Thankfully the casing was not changed and I can still fit the new Hero 4 into my older Hero 3+ and 3 case. But the navigation has been streamlined with the 3 button approach. While my Hero 3+ also has a third button on a side, it mostly served as a wi-fi switch, where Hero 4 uses that button for lots of purposes which makes it a lot easier to navigate and choose the right setting on the fly. GoPro cameras have always had flimsy navigation, but the new “utility” button makes it a bit better. You can even use that button to make a quick bookmark on the video to be able to jump to it quickly later on. This brings me to my next point about navigation and LCD screen in general. While Hero 4 Black edition lacks dedicated LCD screen in the back, GoPro more than makes up for it with its mobile app. Once you pair your camera with the app, you can set all of the settings wirelessly on your mobile device and even view live feed and re-watch filmed footage through the wi-fi signal. Basically, once you turn on wi-fi in camera it creates and broadcasts its own wi-fi hot spot that you can connect to with your mobile device. I love using my Android phone with a large screen to see what I am filming in real time (with maybe half a second delay). However, please note, that there is no live feed when shooting at 120 fps. That’s a bit annoying.

Time-lapse and dark environments. Hero cameras are notorious for capturing lots of noise once you take them out of a daylight environment. Hero 4 Black’s quality is noticeably better in darker situations. There are also two types of time-lapse options: normal and night. The regular time-lapse is great but I was really impressed with the image quality of night time-lapse. You can pre-set all of the parameters and the camera just shoots good looking footage (even in a very dark setting).

Audio. GoPro claims to almost double the dynamic range of their audio. I can’t confirm that with my testing, but the audio is a bit better. There are two visible microphones on the body of the camera even though it’s still usually enclosed into a water sealed case. So don’t expect anything revolutionary.

Raw capture (Protune). My Previous Hero 3+ model already had an option to capture images in Protune mode, which is basically RAW format that captured maximum amount of data without any conversion. Hero 4 Black edition now also lets you capture videos in Protune mode. In this mode you can set your White Balance, color profile, ISO limit, sharpness and EV compensation. You can then open your Protune footage in post-processing and color grade it as you wish. This is recommended for pro videographers only, who need to match and color grade all of their content. I think that even without Protune the camera does a good conversion and pulls pretty good colors.

Final thoughts. This camera might not be targeting an average Joe. Its lack of LCD screen will definitely deter many people from buying it. That’s why GoPro have included other cameras in their lineup (see below). Hero 4 Black is for enthusiasts and pros who want the best resolution and speed and those who understand the power raging inside this tiny camera. Overall I really love the new GoPro Hero 4 Black camera. You will be hard-pressed to find a better value for a small camera that can film in 4K at 30fps and full HD at 120fps. And when it’s paired with all of the attachments I’ve accumulated over the years, this buy is a no-brainer. This camera can fly with many drones, it can dive underwater, and it can ride on a car or a surfboard and even fit in a glove box. Of course you need to get high capacity, fast memory cards to keep up with all the data, battery life and overheating can also be an annoyance. But considering all of its abilities, I can highly recommend this camera, especially if you’ve been on the fence previously.

Help us support this website.
If you plan on purchasing
this camera, why not use our affiliate link below:
Get GoPro Hero 4 Black from Amazon right now.

The new Hero 4 silver edition is basically the Hero 3+ with a built in screen. I think it’s nice to have the screen back there for general composition and navigation but I don’t think it’s essential, especially if you are used to using larger screen through GoPro mobile app.

If you don’t need to capture 4K footage or 120 frames per second at full 1080 HD quality (it will do 720 at 120fps) then this camera is still a great value, especially if you can pick it up on sale. 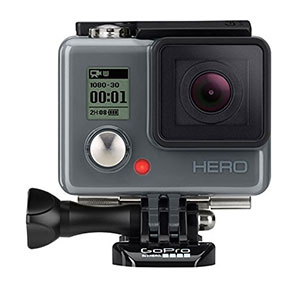 GoPro now also offers a stripped down version of their cameras in the new lineup, simply called Hero. It shoots full HD 1080 video at 30fps or 720 at 60fps. And it does 5mp still frames when compared to 12mp at up to 30fps on Hero 4 Black and Silver Edition. But its price point is way cheaper and it still comes in a water sealed case. If you can get it on sale at around $100, it’s a nice camera to have for those B-roll shots, especially in dangerous situation where you think the camera might not survive. 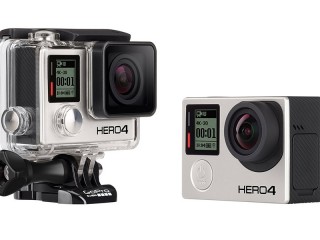