Recently we started filming behind the scenes footage of all of our photoshoots as an additional feature for the website. During the filming we quickly realized how much you have to rely on our camera’s tiny LCD monitor for focus and subject tracking, so we started looking for a better solution. There are plenty of options to choose from when it comes to external LCD monitors for your DSLR, however more likely than not you already own a device with a large enough LCD screen, such as your smart phone or a tablet, so why not try the App route instead at a fraction of a cost of a new external DSLR LCD. If you happen to own a Canon DSLR and one of the many Android devices, such as Galaxy S3, S4, Galaxy Note, Note II or Nexus 7 and 10 tablets, DSLR Controller App is the one for you.

According to the developer the App is still in the beta with quite a few known bugs and issues that need to be sorted out before the full release, however even at this early stage in the development it is quite amazing.

For starters, just look at the very long list of features of this application:

Essentially you have almost the entire range of camera controls available to you right on your smart phone or tablet device. Additionally, you can transfer any photos or footage you just took to your device. It’s important to note that some of these options depend on your camera’s dial mode. For example, you will not be able to change ISO or Shutter speed when your camera’s dial is set to Full Auto. Also the built in LCD and Camera dials remain functional when App is in operation, which means you are still able to use your camera as you did before and just use the app to preview your shots, Full screen view that removes all buttons from the app is available under the options menu.

How to get started using DSLR Controller App

As opposed to buying an external LCD for your camera, the initial investment is quite minimal. You can purchase the App for $7.99 on Google Play marketplace. Other than that you will need your Canon DSLR (sorry Nikon users, according to the developer support for Nikon and Sony cameras is planned, but only after the core Canon application is released), your Android device (you can view this page for a full list of supported devices), a mini USB cable that came with your camera and micro USB Host cable, which you can get from Amazon for about $5 + Shipping. After installing the application on the device it’s as simple as connecting the camera to the device via the host cable. DSLR Controller app will automatically launch when a connection is detected. 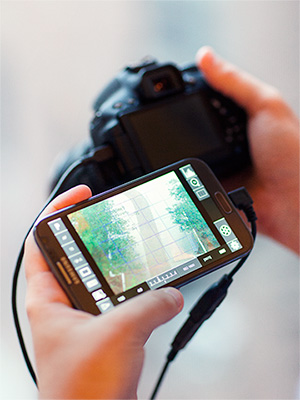 If you happen to own more than one android device, such as the Galaxy phone for example and a Nexus 7 tablet, you can run DSLR Controller wirelessly via this mode. Connect your first device via cable to your Canon camera, go into DSLR Controller Options and select Wi-Fi Passthrough Mode. Launch DSLR Controller App on your second device and it should automatically connect to your camera.

Some Issues with the App

Lag is an issue when using this App, however it is more annoying than incapacitating, and it certainly won’t prevent you from doing your job. In my recent tests with DSLR Controller App on Galaxy S3 and Rebel t4i, Live View on the phone lagged only fraction of a second behind Camera’s LCD. Quality of your cables and Wi-FI Stregth can have a big impact on the lag.

Live View Auto Focus sometimes can get very laggy if controlled from the smartphone and not the camera. In my test on Galaxy S3 the application froze several times trying to autofocus on a subject in low light conditions. However this doesn’t mean the feature doesn’t work at all.

You cannot preview Raw CR2 files or MOV files in the application’s Gallery mode. This isn’t so much a fault of the application, but rather of the platform itself. Android devices do not come with a decoder to preview those files.

EDIT: With the recent update to the DSLR Controller App you are now able to preview MOV files by downloading Free MX Player for Android.

Overall this is one hell of an application for Canon DSLR enthusiasts and professional and well worth $7.99 we paid for it. DSLR Controller opens a lot of new possibilities when it comes to live previews for both Photographers and Videographers alike. 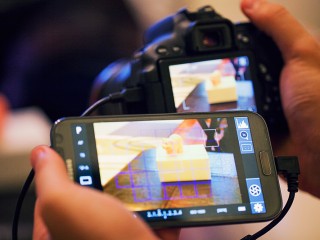