I have to admit, this was not a planned look. This whole idea was born spontaneously on the spot during a completely different photo shoot.  We have been finishing a glamour-actress scene in a studio setting and were getting ready to switch to a boudoir scene in a different wing of the studio which was custom build just for that session (you can check the results here). In between these two sessions, our makeup artist pulled out this futuristic looking top and as soon as I saw it, an idea started to conceive in my head.

At first, I thought of creating a sexy droid look but quickly discarded the idea because I didn’t have any interesting props with me at the time. Then I thought of a super hero theme but swiftly put this idea to rest too, since I thought that to pull that kind of a look would require a bit more planning and preparation. Finally, I decided to go with this wicked sexy theme. We had a long red wig ready to go for the bedroom lingerie session and I though its rich red color complimented the blue top, so I decided to try it out. Luckily one of the walls of the studio was also painted red, which looked perfect for this shot. However the photo looked too flat with one main light. So I used an additional light behind the model to blow-out a halo around her and give the image a bit more depth. As I started shooting I thought I could use some additional accent lighting to further outline the model. And since the shot was turning out kind of wicked already I though a blue gel might produce an interesting outline. As I started shooting I mentioned to my model that the whole scene looks wild and she pulled this wild cat pose, which really made the shot work on a whole new level. 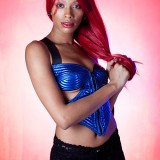 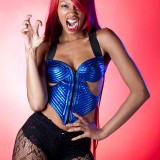 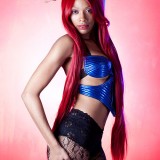 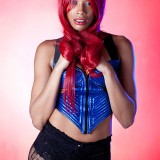 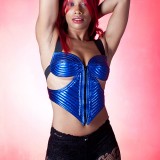 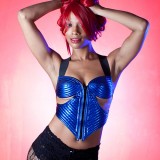 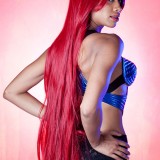 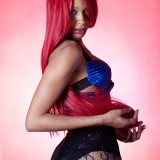 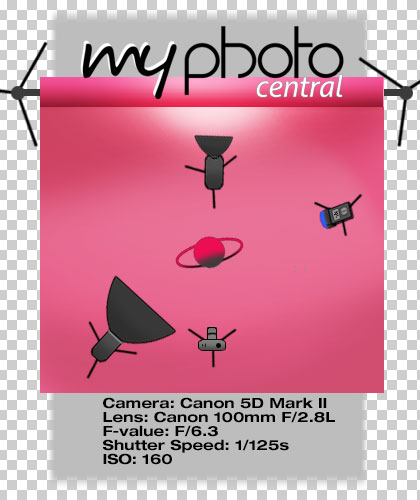 This series was shot on Canon 5D Mark II with Canon 100mm f/2.8L IS Macro lens. Shutter speed was at 1/160 of a second to catch some of model’s movement. ISO was set to 160. Aperture was consistently at f/6.3 to maintain a good focus on the model while trying to somewhat blur the background.

As always, I am open for comments and criticism and I would love to know your thoughts and remarks about this shoot. Please take a moment and let me know what you think or perhaps what would you have done differently, thank you. 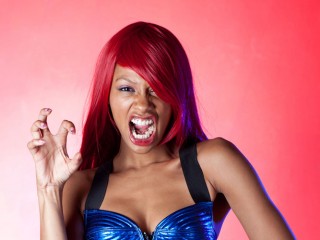