Sexy woman in a dark doorway photo shoots have been done over and over again by many photographers, and yet there is something about this imagery that doesn’t get tiresome or becomes redundant. Most likely it’s the sexy woman part but I would like to think there is more to it than that. I believe there is always a story. A story of a seductress in a doorway being observed by a private audience from a dark room; an intimate and private scene. It’s a scene where a spectator feels special because of the narration of the story. I always enjoy looking at such photos but more than that I love creating them.

For this photo shoot I wanted to create a seductive scene of a sexy woman standing in a doorway, being side lit by a hallway light, while the viewpoint is coming from a dark bedroom. I placed the model in the doorway since it serves as a border between the bedroom and the rest of the house. A bedroom is usually a very private and personal space and is typically off limits to all but most intimate guests, where the rest of the house can frequently be freely explored by all visitors. There is also that element of entrance. When a woman enters a bedroom in such a sensual atmosphere she can display numerous emotions depending on her character and some personal traits. She can be shy, confident, insecure, provocative or even defiant. I always strive to capture these different feelings in such scenes which often act as triggers for arousal. It is interesting to see how personal the image becomes when the model looks straight into the camera and how distant it can feel when she looks away. For some of the “looking away” shots, I was trying to create a feeling that there is a door open from another room, where the light is coming from and where the object of her seduction is presumably located. So the camera is purely recording this encounter from an empty room. While the “looking straight at camera” shots, place the viewer as the object of her seduction, who is situated in the dark bedroom. 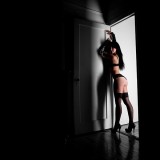 The model in this series is in great shape and I wanted to outline her figure and especially her abs using light in addition to creating moody “other room” lighting. So I had to position the model in some specific poses to showcase her curves. As we started shooting, my mind began firing all kinds of ideas that might also work with this setup, so I frantically began looking for props which would work best for some of these ideas. This is where boudoir themed images went from classic lingerie into more fantasy roleplaying series. Of course, sexy French maid had to be included. Personally, I have never seen or heard of any maids cooking seminude in a partially lit hallway, but hey, we are not going for realism here. I merely create images which can hopefully invoke one feeling or another in anyone who is viewing them. In this case I am clearly going for popular erotic fantasy.

Another theme had a darker twist to it. The whole zombie apocalypse idea seems to be very popular these days. Whether it is because corporate masses are tired of all the cubicle dwelling as well as crowded transportation and want to shoot most coworkers in the face or people just want to feel special and associate themselves with hero survivals who can go through hell and rebuilt our society, it is widely popular fantasy that has sprang tons of popular books, TV shows and games. I, myself, am a big fan of such games, especially when playing co-op with my friends. And usually in such groups there is a sexy protagonist badass lady who can kick butt while remaining super seductive and always looking like she has no care in the world. Following this idea I wanted to re-create such a character in my work. This is how Zombie Hunter shot came into being. I didn’t want to have any gore in this image, so I only added a little bit of blood on the axe to illustrate her proficiency with the weapon. High heel boots, lace stockings, bullet belt, leather gloves, trench coat and a bloody axe, how sexy badass is that? But wait, she is not scared; she is smiling and daring enemies to come closer. This is not real you say? Yes it’s not, so is zombie apocalypse.

And lastly, the pink outfit. This was purely the model’s idea. I am not sure if the outfit says naughty cheerleader at a frat party or a bad teenage girl learning the art of seduction. But I think the concept works. Feel free to comment with your thoughts. Last scene depicts a girl walking in on parents having a good time or perhaps a woman discovering a cheating husband, whichever you prefer. 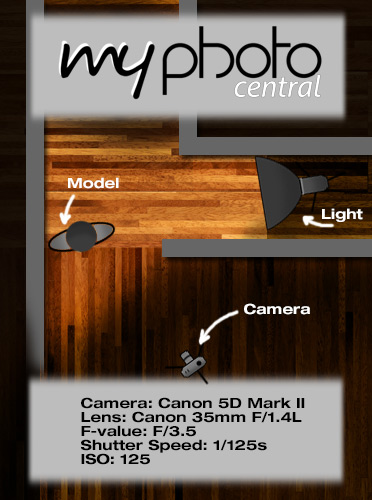 For lighting I’ve used a single Calumet Travelite 750 with a large strip box which defused the light just enough to make it look like it was lap light coming from another room. However, for those if you who would like to try a similar setup I think a regular umbrella would probably suffice but the light might not be evenly spread throughout the entire height of the model. The main challenge with a single light that is placed slightly behind the model is getting all the shadows just right. Try to instruct the model(s) to perform minimal movements of different body parts to see exactly how the shadow falls into places and shoot only when all the shadows are in the right place.

As always, I am open for comments and criticism and I would love to know your thoughts and remarks about this shoot. Please take a moment and let me know what you think or perhaps what would you have done differently, and thank you for reading. 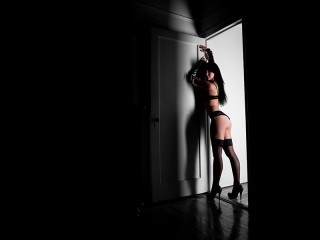