Some time ago I have had the pleasure of photographing menu items and interior design of Psari Seafood Restaurant and bar. All the images were intended to be used for promotional purposes, such as their new website, advertisement and editorial publication. Psari restaurant is a cozy Greek restaurant located on a busy 36th Avenue in Astoria, Queens. In fact, “Psari” stands for “fish” in Greek. It’s a great place to stop by for launch or happy hour, especially if you like seafood. Psari has a true Mediterranean atmosphere to it and the food is astounding. Whether you wish to have a grilled octopus, fresh Maine lobster, king crab legs or raw oysters and clams, they have it all prepared to perfection. But even if you are not into fish, they offer excellent steaks and pork chops. You can check out their menu full menu at psari-restaurant.com.

The reason my introduction sounds like an advertisement copy is because I was truly impressed by the quality of all the dishes a cozy place like Psari offers. When we do restaurant photo shoots, such as this one, we typically get to eat all of the food after we are done working with it. This time was not an exception, we could (and did) eat pretty much every item on the menu. Since we don’t use any artificial glazing or propping, all the food was perfectly safe to eat after we were done shooting it. So when I say every single dish on their menu is delicious, I really mean it because I’ve tried it. My mouth is actually watering as I am writing this. 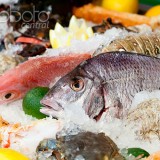 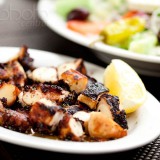 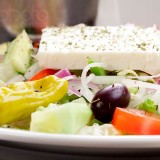 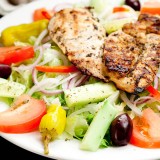 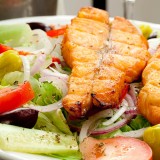 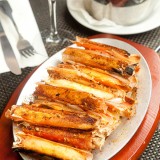 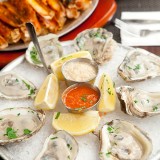 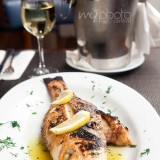 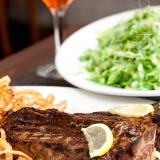 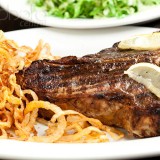 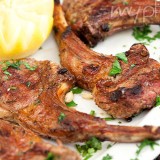 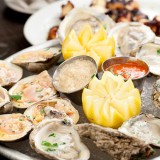 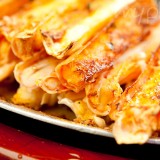 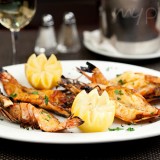 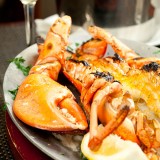 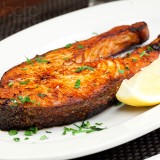 Since some of the dishes are grilled on an open flame, some parts may get charred and not look presentable for a promotional photo shoot. I have initially noticed that on grilled octopus and mentioned it to the chef. But he assured me that “burnt” patched give the dish its authenticity and people who can distinguish this will understand the taste behind the image. I can attest to this, since when I tried this octopus my taste buds were overwhelmed with the richness of flavors blended with smell of open flame. While this “burnt” look may not appeal to everyone, I believe the chef decided to present his dish authentically because Psari Restaurant is mainly interested in serving their neighboring community, who for the most part, understand great dishes when they see it. Since it is not a restaurant chain spread over the entire nation, they can afford the luxury to target a specific group of clients. In fact, when the Maine lobster was brought out to be photographed, it was slightly “charred” but the diners sitting around the shooting scene started a mini bidding war. Well, the bidding started partly because the lobster was now “famous” and partly because it looked so good (and I guess partly because it’s a lobster). Either way the lobster was actually given to the highest bidder who ended up paying more than the sticker price.

Typically when I do restaurant photo shoots, such as this one, I choose a timeframe when there will be minimum or no people at the restaurant and pick the most remote position to do the work. Mostly because I don’t want to bother the patrons with all the cables, lights and movement, but also because I don’t want to be bothered by them either. This session was slightly different because the interior of the place is not big enough to be completely hidden and also because they draw a crown of clients during lunch, and not just happy hour and dinner. Actually as we started shooting, newcomers started requesting to be specifically seated next to the shooting area – effectively making it a lunch with a show. So our photo shoot gradually turned into a performance art piece. I actually enjoyed it. People were very polite and interested in the inner workings of a photo shoot. Some people were surprised that we did not artificially pamper the food to make it look better; saying that most franchise restaurant’s food looks different from their menu images. All I can say is that you don’t need to “fake” how the food looks if the food is that good. 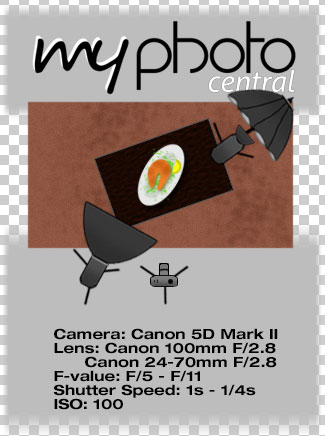 For lighting I used my Calumet Travelites 750. I had one main unit with a medium softbox in front and slightly above the dishes. The other unit with umbrella was positioned behind the dishes. Both units were set to maximum continuous lighting and did not fire strobes. 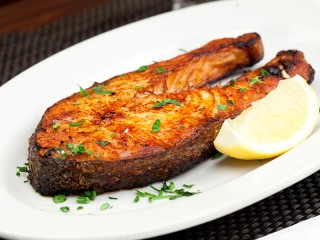