In my last post I discussed the importance of understanding how the camera is seeing light and making uninformed decisions to calculate exposure for you, and how to use exposure override in an attempt to educate the camera (it’ll never learn). There will come a time, with practice, where you can just look at a scene, determine how you want various elements within the scene exposed, and set the proper exposure using the camera’s exposure meter as a guide. Understanding the Zone System will immensely improve your exposures.

Ansel Adams and his mentor Fred Archer developed the Zone System in the 1930s. This system didn’t receive widespread attention until it was explained in his 1948 book “The Negative”. It’s a system wherewith an exposure can be divided into ten “zones”, with pure black in Zone 0, middle gray in Zone V, and pure white in Zone X (the system uses Roman numerals and we’ll stay true to that). Adams used this system primarily when developing his timeless black-and-white prints. Each Zone is separated by one stop, be it a doubling of ISO, f-stop, or shutter speed. To clarify, if you’re exposing in Zone V using a shutter speed of 1/200 sec, Zone IV would be 1/400 (darker) and Zone VI would be 1/100 (lighter).

The film, papers, chemicals, and developing processes that Adams used enabled this dynamic range of ten zones. With digital photography, we’re unfortunately limited to a smaller range of zones (we won’t be discussing High Dynamic Range, or HDR Processing, in this article), and most consumer printers have an even smaller range. With the digital sensors we have today, pure blacks generally fall just outside of Zone II and pure whites just past Zone VIII. On your camera’s light meter, Zone V is centered at 0 Exposure Value (EV), Zone III is -2 EV, Zone IV is -1 EV, and so on.

I recommend shooting in Manual mode and using Spot Metering when utilizing the Zone System to determine exposure. Some high-end cameras have a mode called Matrix Metering, which evaluates different parts of the scene and uses computer algorithms to come up with the correct exposure, but we’ll assume for the rest of this article that we can’t afford one of those cameras just yet – we need to first pay our dues using the Zone System. Spot Metering will give you the most control over how you’re metering the scene, and Manual mode will not only help you become a better photographer but will eliminate confusion when auto or semi-auto modes try to change exposures without your consent.

So what do we do now? You’ll need to look at your scene and figure out which Zone you want to place each element. Let’s take a look at Figure 3, a photograph of the Alabama Hills near Lone Pine, California – one of Adams’ playgrounds. I envisioned a B&W photo while I was composing this because the backlit scene lacked color. The two most important things for me were to 1) not have the sky appearing as pure white and 2) being able to maintain texture in the shadows. I would accept a little bit of pure black on the underside of the arch. 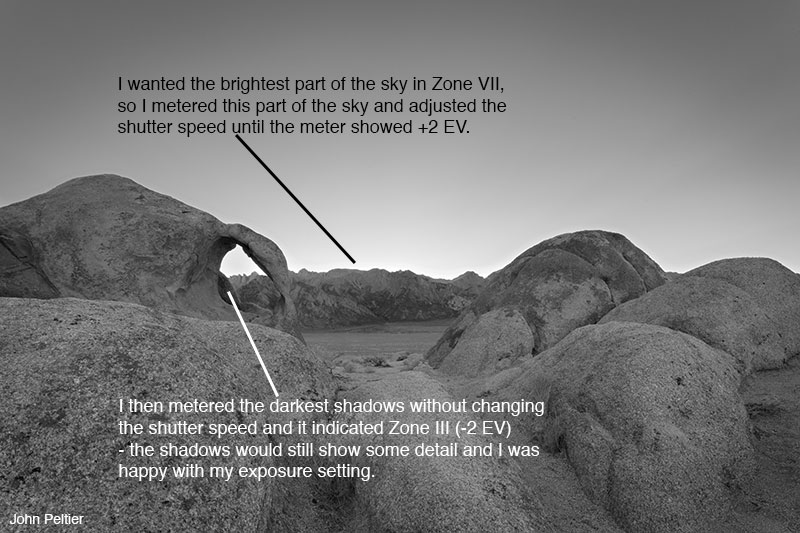 I made sure I was in Manual mode and using Spot Metering. I zoomed in on the brightest part of the sky and adjusted my shutter speed so my meter was indicating an EV of +2, which puts it in Zone VII – just under bright white. I took a deep breath, analyzed my scene, and tried to figure out the darkest area where I still wanted to maintain texture. This was on the large boulder under the arch. Without changing any of my exposure settings, I zoomed in on that area, took a spot reading, and it indicated an EV of -2 – Zone III, just above black. I knew I would still have some texture here. Everything was going to work out for me so I zoomed out and made a few exposures.

A quick digression – you should always be shooting in RAW mode, especially when using the Zone System. This gives you more tonal range and preserves more detail in the highlights and shadows, in case your exposure is off – you’ll get more detail and texture in Zones II & VIII. I knew I could pull a little more detail out of the shadows in post-processing, and with the sky in Zone VII I didn’t risk blowing out any highlights (i.e. lose any information).

What would happen if this scene had more contrast? If the sky was brighter or the shadows were darker? I wouldn’t be able to fit everything within Zones III-VII. Something would have to be nearly pure black or white, and I’d have to pick which element was more important – having detail in the shadows or not blowing out the sky. In that case I’d probably expose for the sky and still put it in Zone VII so it didn’t appear pure white, and accept some blacks in the shadows. You’ll have to make these tough, life-altering decisions as well.

And what about people? In my last post I mentioned that when metering off the palm of my hand, a correct exposure reads +1 EV, which is Zone VI. This is usually true for most Caucasian people – so take a spot reading on their evenly lit skin and set +1 EV. Darker-skinned people like Native Americans and Hispanics will be in Zone V (0 EV) while those of African descent will be properly exposed between Zones III-IV (-2 to -1 EV).

There’s not much you can do with bad lighting and high contrast in a scene, except for HDR imaging, modifying the light, and/or using filters. With a high-contrast scene, typical on sunny days with shadows present, you have to ask yourself, “which elements of this composure are the most important, and which Zones do I want them in?”

Now go out and practice…as you look out upon the world on a daily basis, try to see in “zones” and it’ll take the guesswork out of your photography! 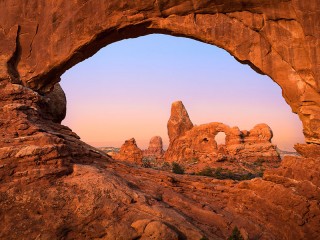