Light control is one of the most important aspects of photography. When we are able to understand and master light, the quality of our images improves tremendously. Beginner photographers typically use built-in camera flash only, but quickly recognize all the limitations of a built-in unit. Many people who are looking for advanced light capabilities invest into additional on-camera flash unit (speedlite for Canon and speedlight for Nikon) to improve their image quality. However many photographers do not understand the full potential of an advanced on-camera flash unit and will often resort to just using automatic settings. I believe these are wasted opportunities and would like to discuss some of the more advanced features of these flashes. Using these features will expand your artistic horizon and make room for greater versatility in your work. Since I personally have the most experience with Canon’s speedlite units I will be using them as examples in this article, but most of these features are also available on Nikon’s speedlight and third party units.

Hot shoe mounted flash units come in a range of models from basic to very advanced powerhouses, but all of them are capable of shooting in auto mode. These flash units usually use E-TTL (Canon) or i-TTL (Nikon) flash controls which are metering modes that use evaluative flash metering with preflash reading to measure correct exposure for the camera. Typically these units also employ their own AF-Assist beam that will measure the distance to subject from the camera in order to provide more accurate focus measurements. To get the most out of auto settings for a flash unit it is important to use a flash lineup native to your camera (ex: using Canon speedlites for Canon dSLR camera). A compatible flash unit will easily be able to transfer data to and from the camera. When using auto mode flash, all you have to do is press the shutter release button, your camera, lens and flash will exchange information and usually give you a very good results. However, a lot of third party brands are offering almost identical auto performance at a fraction of the cost so if you are on a tight budget it might be a good idea to get an off brand unit.

The easiest thing you can do to improve lighting conditions is to bounce the light coming from your flash. Direct flash light often produces hard lighting spots and bold shadows, which can look unflattering on photos. Most flash units can be rotated in virtually any direction. You can easily twist (typically by pressing a dedicated button first) flash unit’s head in a direction where you think you might achieve the best light bounce (typically white or shiny surface). A wall or a ceiling can be very suitable for bouncing light, but the possibilities are limitless and depend solely on your imagination and the setting. A well bounced light will typically create well balanced lighting and soft shadows on your subject, but remember that bouncing light off colored surfaces can cast color tints as well. Also keep in mind that you might need to manually increase flash intensity in order to compensate for light loss due to reflection and dispersion. Furthermore, light bounce might not be as effective if bounce surfaces are black or too far away.

There are many situations where automatic settings will not produce the best possible results and this is where more advanced features of a flash unit come into play. After all, the ability to understand and control camera and flash settings is one of the main qualities that distinguishes a true photographer form a point and shooter. 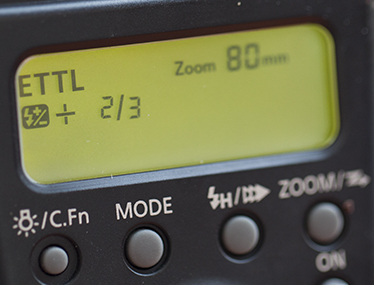 Most advanced (and expensive) flash models will have a feature called flash exposure bracketing. It allows for taking three shots with different flash exposures. While this option was most useful in film photography, where you couldn’t see the results right away and had to resort to shooting with slightly different exposures to make sure you’ll have perfectly lit image, in dSLR photography this functions is still pretty useful when you are in a rush and have no time to experiment with exposure setting or if you’re shooting HDR photography. 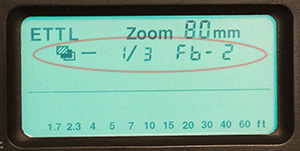 When setting flash exposure bracketing on your unit you will be asked to set the range of bracket in 1/3 – stop increments (1/2 on some cameras). When that’s set you can start shooting. You will need to shoot in a single-shot mode because the flash will needs some time to recharge. The flash will bracket the exposure in “normal, over, under” sequences. Once all these shots are complete the flash will automatically switch back to normal mode. If you are going for HDR effect, remember that you will have to have your camera at the same position for all three shot and give your flash enough time to recharge.

To explain high-speed sync I need to briefly describe how camera shutter works. Basically, when you press a shutter release button there are two curtains that pass over the sensor. First curtain exposes the sensor to light while the second curtain follows it, closing the sensor, effectively finishing light exposure. The speed of this process depends on the setting of the shutter speed. The slower the shutter speed is the longer the gap between curtains thus the more light reaches the sensor. Typically when the shutter speed is slower than 1/250 of a second there is a moment when the entire sensor area is exposed to light. That’s the perfect time for flash to trigger in order to light the entire scene. When shutter speed is faster than 1/250 of a second the gap between two curtains gets smaller and never exposes the entire sensor at once. In such case the image is technically recorded by camera in small fragments that are exposed to lights.  If a single flash strobe is shot during this time there will be some darker areas, because parts of the sensor were not exposed at that instance.

Most modern speedlight units now employ high-speed sync technology, which makes it possible to achieve correct exposure on shutter speeds higher than 1/250 seconds. This is achieved by having the flash trigger numerous bursts of light while both curtains reveal some sections of the sensor. This is a neat technology. Think about it for a second,  a flash unit has to shoot many strobes of light during up to 1/2000 second shutter release. No wonder these flashes are so pricey.

Because high-speed sync is such a daunting task for a speedlite, there are some limitations. Flash unit needs to shoot a lot of smaller strobes at a very fast pace, this means that there is no time for a full charge to recycle. This creates a limited amount of light production. Nowhere near to speedlite’s maximum capabilities at optimal sync conditions. Consequently because these mini-strobes are less powerful during high-speed sync they illuminate smaller areas, which mean that high-speed sync works best on subjects relatively close to a flash unit.

Second-curtain (aka rear-curtain) sync is a process where a speedlite flashes when second curtain is about to close. This method works best for long exposure or moving subject shots. By default under normal conditions the camera triggers flash when first shutter curtain reveals the entire sensor area. However, during slow shutter speeds if a flash is triggered at the beginning of the exposure, the initial scene gets frozen by light while a sensor keeps on getting light exposure. During this time all movement, be it camera shake or subject movement, will look blurry. Effectively every movement past spark of flash will look washed out. Typically this effect looks unnatural to our eyes. People like to see blurred motion with a frozen subject at the end of its path, rather than its start. This is when second-curtain sync comes in handy. When this function is engaged, shutter flash is triggered at the end of the exposure, freezing the scene at the end of a movement. 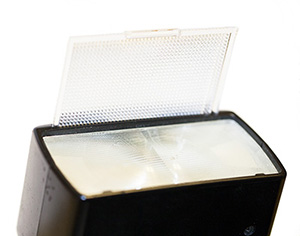 Most speedlite flash units have an ability to zoom its light source for a different amount of area coverage, depending on the focal length of a lens. Native flash units will be able to receive focal length automatically from a camera it is attached to. However, occasionally you might want to adjust flash zoom manually. Typically all flash units that have zoom capabilities allow for manual change. This function is most useful when bouncing light off of various objects. It allows for a more focused or dispersed light beam. Additionally most speedlite units come with a wide angle panel that’s usually embedded into the front element of a flash and can be easily pulled out and placed over flash head in order to spread the light to wider areas for lenses up to 14mm wide. Also this wide panel can be used to add some sparks in subject’s eyes. Some speedlites, such as Canon 580EX II, also offer an additional white panel that can be used with wide panel in order to create catchlight. The way it works is you place flash head in a completely vertical position, so that it looks straight up. Then pull up wide panel or catchlight panel, or even put a white paper or plastic in its place. With this setup when flash is triggered a small amount of light will bounce off of this panel and create a spark of light in subject’s eyes making them look livelier. 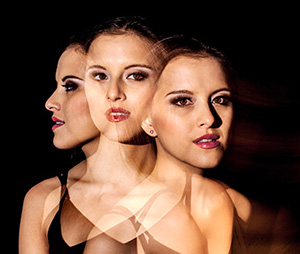 Stroboscopic flash (aka Multi Mode or Repeating Flash) is a feature that allows for a series of flashes to be fired continuously in a single exposure. This freezes a moving object on the frame multiple times. Multi mode is usually available on most advanced flash units such as Canon 600EX-RT and Nikon SB-800/900. It is a completely custom feature where you have to set up all parameters manually. When this option is engaged you will need to set flash output, number of shots and frequency. Frequency is expressed in Hz which represents the number of flashes per second. It is best to use this simple formula when setting these parameters. Number of flashes divided by frequency equals shutter speed. For example: let’s say you want to have 6 flashes with a firing frequency of 3 Hz, which means (6/3=2) you would need to have shutter speed set to at least 2 seconds.

Most modern speedlites can be triggered wirelessly. High-end models have an ability to act as either master or a slave unit, while most other models can act as slaves. In photography lingo slave simply means that the unit can only receive trigger signals, while master can both send and receive them. Additionally wireless setup can consist of several groups of units, each having different settings. This opens up a whole world of new possibilities. However, this function is too broad to be fully covered in this article.

Advanced speedlites typically support external power packs. If you find yourself using flash a lot and having to change batteries frequently, consider purchasing one of these packs. These power packs will greatly increase the amount of strobes you can fire and reduce recycling times. Most of them will support 8 or 4 AA Ni-MH rechargeable batteries, but some come as a single NiMH rechargeable unit.

Virtually every parameter and function of a speedlite flash unit can be changed through custom functions. You can switch between metric or imperial measurements, disable/enable auto power off, FEB sequence, AF-assist beam, auto zoom, change metering modes and much more. Additionally, while most speedlite units have a convenient LCD screen from which you can control and customize settings, you can also access them through you camera’s menu options.

There are numerous accessories available for different speedlite units. These include flash diffusers, mini softboxes, bouncers, reflectors, rain protectors and much more. 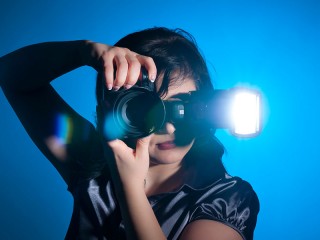