As I have pointed out in a previous article Using single on-camera flash unit is a good way to improve the quality of your images, but to achieve more versatility and better results you need to use several light sources. Using multiple light units gives you an ability to completely control and position your light, effectively molding the scene by creating or removing shadows. Speedlite flash system has an ability to work wirelessly. Furthermore this system is a nice alternative to larger studio light units which are much heavier and require separate batteries.

Multiple flash units can be triggered via wires, infrared, light signals or radio transmissions. Wires are relatively inexpensive, but they typically have a very limited range and create a tripping hazard. Infrared units are technically wireless but they can be accidentally triggered by all kind of light flickers and work poorly in bright light. Radio transmission is a true wireless form of communication which has a great range and doesn’t require having a direct line of sight with the main unit, something infrared triggers require. However, this is also typically more expensive option and will usually require a purchase of additional equipment, which might not support your camera’s automatic metering such as E-TTL on Canon or i-TTL on Nikon. Keep in mind that radio transmission is also prone to interference from other wireless signals. Wireless speedlite transmission, on the other hand, is built-in to most flash units. It uses a series of flash signals to transmit information. It supports native automatic metering system and provides wireless capabilities for versatile implementation.  If you already own speedlites, you have this option, so why not learn how to use it and improve your photography.

Note: since I have the most knowledge and practice with Canon Speedlites I will use their lineup in my descriptions, but similar principles apply to Nikon’s Speedlights, Yongnuo units and other manufacturers.

Using multiple flash units wirelessly can be very easy because they can communicate with each other and automatically determine the best exposure level based on your camera’s settings, focal length and ambient lighting. However, it is important to remember that you should always use flash units that support your camera’s automatic metering. Canon uses E-TTL/E-TTL II metering while Nikon uses i-TTL, therefore, only use flash units that support your camera manufacturer’s architecture to take full advantage of automatic flash exposure. In most cases, automatic exposure flash metering will do a great job at determinant the best flash intensity, but if you bounce your flash or feel that the light is not satisfactory you can always change it manually. 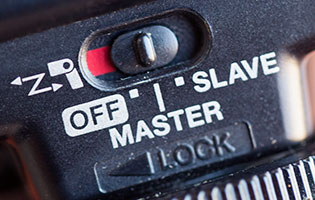 In photography, a master is a term applied to flash units that are capable of sending and receiving information. To have a multiple flash wireless setup you will need at least one master unit. A slave, on the other hand, is a term used to describe a flash unit that is only able to receive information. Master units can also serve as slaves if needed. Canon’s Speedlite 600EX-RT flagship model is the only unit in the lineup that can serve both as master and slave, in addition it also features radio triggering which is beyond the scope of this article. All the other Speedlites can be used as slave units. Additionally Canon and Nikon offer separate transmitters that can trigger slave units but do not provide any light themselves. These are Canon ST-E2 and Nikon SU-800. They are especially useful if you already own one or several slave units but don’t have a budget for an expansive master flash. Transmitters usually cost a fraction of a master flash unit and are significantly lighter, but thy have a shorter range (about 30 feet), can only support two groups (explained below) and you give up the ability to have an on-camera light source.

The first thing you will need to do in order to setup wireless Speedlite lighting is to enable slave setting on each flash unit, except master unit, which would obviously need to be set to master mode. This step can be different as each model is different, so please refer to your flash user’s manual for specific instructions for your unit.

When you enable Master/Slave functionality you will have an ability to select a channel. The channel refers to a frequency at which the signals are transmitted. This function is most useful when there are other photographers present on a shoot that use similar equipment. Setting your units to different channel will eliminate interference between the equipment. Make sure that all your flash units are set to the same channel.

You can have up to three light groups with your wireless Speedlite system setup. These groups are called A, B and C. The main master flash unit will always be in Group A. The other slave units can be in any of the three groups. These groups allow for a different flash intensity assigned to each one to achieve more control over your scene. All you need to do to your slave units is to assign them to a group. This is done through slave’s LCD screen. The actual group configuration is controlled through master unit’s LCD or in camera’s flash control menu (on select models).

When splitting units into different groups you can control each group’s flash output separately, one from another. A and B groups are controlled in ratios. You camera’s exposure flash control will automatically calculate these ratios and apply correct intensities. These ratios can range from 8:1 to 1:8, in ½-stop increments. For example: When the ratio is 1:2 that means that group B would produce twice the amount of light than group A (a one-stop difference). Conversely if the ratio is 8:1 it means that A will output 8 times more light than B, effectively producing a three-stop difference.

Group C, on the other hand, is slightly different. When using group C make sure to set master unit to A, B and C group function. Only then Speedlite flash system will allow you to use C group independently from A and B group ratios. Group C is specifically intended to work with background lighting and other supplemental light. Because of this, rather than by ratios, group C is regulated by using +/- control relative to the overall output of the A and B group lighting.

Furthermore, even though a master unit is required to be in group A you can disable it from firing and act only as a signal transmitter. It is important to note, that It might look like master flash is still firing when its disabled. In reality it is pre-firing strobe signals to other slave units and will not affect exposure of the actual image.

Speedlite wireless system setup creates great versatility, portability and allows for more creative control over your photos, but it has a set of limitations. The most important limitation is related to the way this system transmits signal. Because it uses light impulses to transfer information, this transmission can be obstructed. This is not a big problem when shooting indoors, because light can usually bounce and reflect off of walls and ceiling, but shooting outdoors can become problematic. Essentially the front panel of each Speedlite needs to maintain a direct line of sight, preferably without direct sunlight hitting either unit. Otherwise, if the signal is obstructed in any way, slave units will not receive the signal and consequently will not fire. So placing your slaves behind a subject, wall, tree or anything else will most likely lead to a flash unit failing to fire. If you feel that this limitation is a deal breaker in your line of work consider upgrading to a radio trigger system.

Another limitation of such a wireless setup is that it does not allow for a second curtain shutter shots. That’s when a long exposure shot is taken and the flash is fired by the end of the exposure rather than at the beginning. But since it is not often used anyway, it is typically not a problem for most photographers. 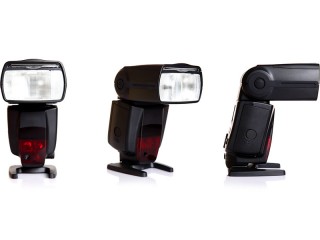