Light meters are extremely sensitive pieces of technology which allow you to take a spot light reading of a scene, whether it is used in ambient or in reflected mode. The area that the light meter covers is very small, only about 0.05% of the scene, which is more accurate than the 3-5% reading area coverage of the built-in light meter. The hand-held light meter is considerably more sensitive over the built-in light meter of your camera, because the later does not give you an ambient reading. With reflected light reading, something that your DSLR gives you, your exposure values are always going to be dependent on the reflectance of the surface. This means that in the same lighting conditions, when using a camera in auto exposure mode, a subject wearing a bright dress will result in less exposure than a subject with dark clothes on. Let’s look at an example.

Let’s assume that you are shooting outdoors on a sunny morning and the subject is wearing a white suit. Your camera will assess the amount of light in the scene and seeing it to be too bright will try to underexpose it. All reflected light meters look at scenes as if they are 18% grey, as such it will underexpose to ensure the image is grey. Contrarily, if the same person were wearing a black suit, in the same lighting conditions, exposure would have been longer. 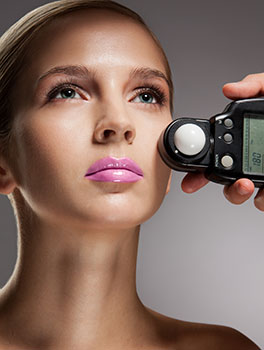 A hand-held light meter can be used in both ambient and incident mode. A light meter has this small white dome-like feature at its head. If you remove it you will notice a small light sensitive lens underneath. When light falls on the dome it gets illuminated and the lens underneath measures the luminance. To correctly use a light meter, you will need to hold the light meter in a way so that it faces the camera. If you are shooting portraits, hold the light meter close to the point of focus. Normally when shooting portraits you would be focusing on the eye of the person closest to the camera. Place the light meter close to the chin or on the same plane as the eye and take a reading. It will tell you the right exposure value for a good exposure.

Please note that you will need to enter two of the values that make up the exposure triangle. An exposure triangle, as you know is composed of shutter speed, aperture and ISO. ISO is usually set to 100. Then you enter one of the other two parameters. Let’s say in this case you enter the shutter speed you would like to shoot at. Then you take an incident light reading for the scene / subject’s eye. Let’s say the light meter says that the right aperture for properly exposing the subject / scene is f/5.6. You enter that value into your camera and start shooting. The drawback is that when you change the lights and/or the model moves enough to effect light fall off, you’ll need to take another reading. 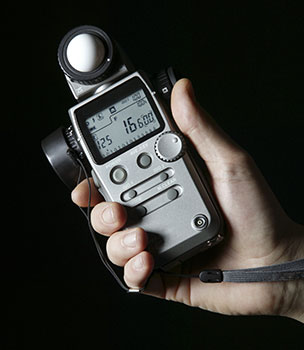 To use the light meter in the reflected mode you need to point the built-in viewfinder towards a point in the image which appears middle-grey to you. In order to do that simply press the reading button to read the reflected light from that point. Once you have a reading you can set the right exposure on your camera and take the shot. The reading given by your light meter will have three values. They will all be in whole numbers and not fractions as you are used to seeing shutter speeds expressed in. The first number is the shutter speed and the second number is the aperture. Light meters are very sensitive and very accurate, right down to a tenth of a stop. That’s why you will often notice that the aperture value expressed such as f/8, or f/11 etc. is accompanied by another number such as 6, 7 etc. It means f/8 and 6/10th of a stop or f/11 8/10th of a stop etc.

With the domination of digital photography very few people actually use light meters these days. Instead, we usually just take several shots and judging by the result, adjust all necessary settings. However, there are cases, especially in a professional environment , where you don’t have the luxury of time to keep on taking test shots. Sometimes you just need to take a reading and start shooting. In such cases light meter is still king.

These days Sekonic brand dominates the market of light meters, here are a few of their models, from the basic one to the top of the line edition with all the bells and whistles: 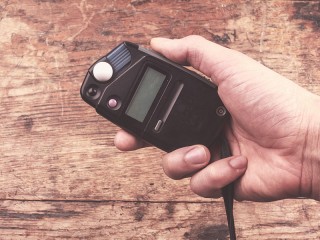