Do an Internet search for “Expose to the right” and a thousand hits will come up, all with differing opinions. One search summary will say it’s the most valuable technique you can learn while the next summary will say it’s a bunch of bull. “Expose to the right”, or ETTR, is the practice of setting exposure to push the histogram data as far right as possible without clipping any highlights (which I’ll explain in just a minute if you need it). The idea being that doing so will record as much image data as possible, because digital sensors record more data in the highlights than in the shadows. So, the theory goes, overexpose every picture and fix it in post-processing. Well it’s not that easy, and it certainly doesn’t apply to every composition.

I didn’t design camera sensors so I’m not going to pretend to wow you with technical gibberish or overwhelm you with numbers. You can find plenty of super-technical articles on the Internet if those appeal to you. I don’t know which side of this ETTR fence to remain on but I’ll share my own experiences with you and why it works for me. You should take everything with a grain of salt and see what works for you.

I was a bracket-hound in my early days of digital. Set the camera mode to Auto Exposure Bracket with -1, 0, and +1 EV, and shoot away, hoping that one of those exposures will be what I was looking for. I needed to carry far too many memory cards to capture all of these exposures and spent more time discarding bad exposures than I did shooting. And I never really learned how to expose that way.

Then a fellow photographer said, “don’t worry about doing that, just constantly underexpose and you can fix it in Photoshop.” He warned me that I should be deathly afraid of the right side of the histogram because I ran the risk of clipping highlights. Imagine each sensor pixel as a bucket, and the more water (light) the bucket is exposed to, the faster it will get over-filled (or over-saturated), and all of that important image data spills out of the bucket. You’ll see that most of the time when a part of your image is pure white instead of showing any texture detail, and there is no amount of Photoshop that can recover that data. So all of my resulting images were dark and I had to bump up the exposure in post-processing. The large shadow areas in my landscapes would have noise and, worse, terrible tonal gradation.

I dabbled in multi-shot HDR for a short while and used exposure bracketing for that, but again I was spending too much time with post-processing. So I started using the Zone System (explained in another article) to get proper exposures, followed by a hybrid of the Zone System and ETTR.

Most photographers I’ve talked to who use ETTR “go to the wall”, so to speak. They use the histogram to determine their exposure, and just keep overexposing until the highlight clipping warning appears (it’s usually helpful to enable that on your camera) then back off slightly. The highlight clipping warning on your camera can deceive you but does give you a decent approximation of when your highlights are clipped. Not much thought goes into exposure with this method – I think it’s a poor habit to get into and you’ll fall out of practice being able to determine a proper exposure. Especially since ETTR isn’t applicable to every scenario.

Let’s take a look at one scenario where the Zone/ETTR hybrid does work. This is a good example because of its high dynamic range (a lot of contrast – dark darks and light lights). I also know that the bright flame will be one of those areas where I’ll accept a clipped highlight – I usually accept this for bright white flames, the sun, and bright reflections off of shiny surfaces (which you’ll hear referred to as specular highlights).

A “normal” exposure, putting the table in Zone VI, would give us a properly exposed candle and table, but the shadow areas would appear very dark. Moving the table one zone to the right (double the shutter speed) to put it in Zone VII overexposes the table but lightens the shadows.

Left: An exposure putting the table in the proper zone. The flame is clipped as expected but the shadows are very dark. Right: Exposing one zone to the right. The flame is still the only thing clipped, and the shadows show more detail.

I then used my RAW converter to decrease the exposure of my overexposed image, and then restored the shadows back to their original exposure value. Take a look at the following comparison. If I exposed “normally” and then pushed my shadows in post-processing, it would introduce slight noise and banding, and I’d lose some of the detail in the shadow areas, when compared to the “overexposed” image.

Left: The “normal” exposure pushed +1 EV in a RAW converter to bring out the shadows. Appearance of some vertical banding. Right: The shadow area in my overexposed image. The leaves show more detail, with less noise and banding.

As I said earlier, this doesn’t always apply to every situation. I’ll generally go to this technique first if I have a scene with a lot of shadows and I have room to overexpose without clipping highlights in important areas of my scene.

Having a “really bright” image imported into my RAW converter is more acceptable to me than having a “really dark” image that I’ll have to push the exposure on. Having smooth tones and more detail in shadow areas is more important than staying away from the right side of the histogram. What’s important to you? 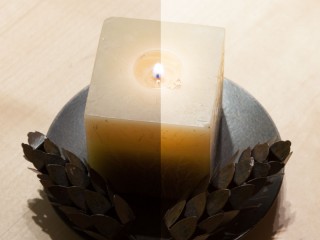