As photographers/videograhers we always need more storage space for our files, as well as backup up options for all that data. Many of us are actually paranoid of losing this data and if you are not, you should be. Having a redundant backup solution is something every person working with digital media should consider. For this reason, I would strongly encourage you to consider a NAS (Network-Attached Storage) device, especially if are running digital media and photography oriented small business (from home or office). The beauty of NAS is that it’s not just a backup drive, its actually its own smart computer that can potentially open up a wide array of opportunity for you and make digital life easier (and often cheaper).

For those of you not familiar with NAS devices at all I am going to quickly break down their basic functionality below. NAS units are made up of storage bays that allow you to easily swap Hard Drives or Solid State Drives. They also have their own Processor and RAM (Random Access Memory) and dedicated operating system. NAS devices are designed to be connected to a network even if your “network” just consists of one computer. So while your external hard drive can only be connected to one computer, a NAS unit can be connected to the whole network of computers with multiple users and separate access permissions. In addition you can setup NAS to be accessible anywhere in the world via internet (your own personal cloud). You can think of a NAS device as a separate computer without a screen. 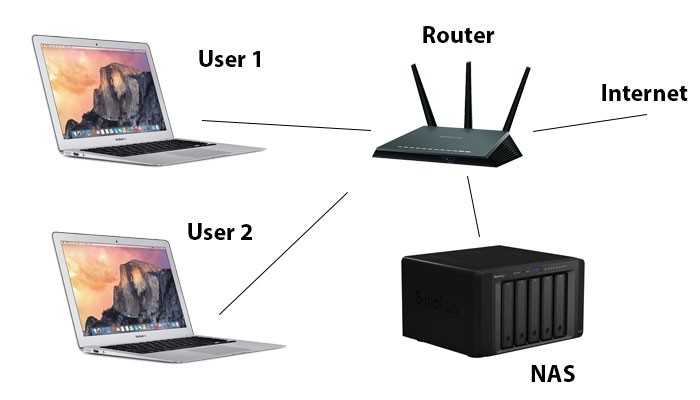 NAS devices house multiple storage drives and thus can have very large storage capacities. Previously NAS drives where simple appliances that could just store and distribute data, but with recent hardware and software developments many of these devices can now serve as Cloud Storage, Media Server, Email Server, VPN Server and much, much more. Plus they can do all of this with redundant backup configuration, so when one or more (depending on configuration) drives fail (and they will), all your data is still intact. If the network the NAS is on connected to the internet, you can easily access all your stored data anywhere in the world. Functionality and price of NAS units can vary greatly on their brand and configuration, but you can always start with the budget model and expand to more advanced system if you decide that NAS works for you.

Please note that while NAS units are an excellent solutions for backup it should not be the only way you save your files. We always recommend using various backup methods. These should include on-site and off-site solutions. Some of these NAS manufacturers offer bi-directional auto backup between NAS units so that you can have similar boxes setup in separate locations and have them automatically sync data between each other. This way if disaster strikes at one location the other unit will still have your data.

Features to look for in NAS

The market is oversaturated with brands that offer numerous models of NAS units and it can be very confusing for a new user. Which features are essential? Of course, the priority of these features would depend on the function you want your NAS device to serve, so I am going to focus on items that a photographer and videographer like myself would most likely look for.

There are numerous NAS manufacturers and each one offers slightly different component and functions. Seagate and Western Digital are one of the players, but while I would use their hard drives in my NAS I wouldn’t recommend their NAS units. It may work for home setups, but not for working photographers.

Then there are NAS devices by Netgear and Buffalo. They mostly specialize in large corporate NAS setups and are not a very good fit for a small photography business. The three brands that I would focus your attention on are Drobo, Synology and Qnap.

Drobo is very popular among photo community. They provide very well designed and constructed units with super simple operations. You don’t need to know anything about networking or even IT. It’s a full on plug and play solution. You can just insert bare drives without any trays, and they include small SSD Cache and UPS batteries inside their units. However, the OS might be a bit too simple for some. It doesn’t offer any advanced features.

Synology is my personal favorite. Their OS is the best on the market, it’s browser based and looks like a real OS that’s fully compatible with Mac, PC and Linux. While it offers tons of advanced features, you don’t have to use them if you don’t want to. It’s fairly simple to operate if you just want to have a backup. The down side is they don’t usually include additional features such as HDMI port, UPS or Info screens.

Qnap is one of the best options out there. They don’t skimp on features and really know what they are doing. Previously their QTS software was clumsy, but with the most recent updates it has become much better and at this point is probably on par with Synology DSM software. Qnap is usually on the edge of progress and they try to include as many new features in their boxes as possible, like their recent addition of Thunderbolt 2 connection. So its definitely one of the leading contenders.

Which drives to use? 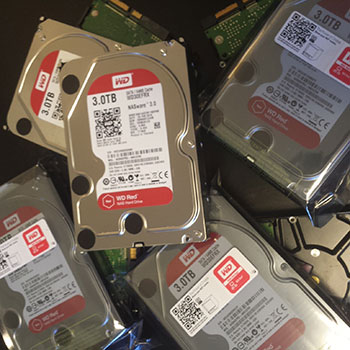 NAS drives are pricey, especially when you realize that they don’t come with hard drives included. You can often find bundles with hard drives, but typically NAS units are sold empty. So you might be tempted to buy the cheapest hard drives and get it over with. But I would strongly encourage you to look for specifically designed NAS hard drives. While regular consumer drives might be slightly cheaper, they are designed for different tasks and might not serve you as well as special NAS drives. I personally recommend WD NAS drives that are an excellent value to performance ratio. No drives are perfect, any drive you buy will fail eventually, that’s why having redundant RAID setup and several backups are always recommended. Keep your data backed up and well protected. 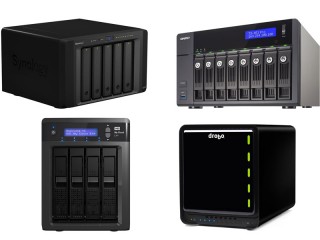