This article is a description of similarities between human eye and the basic camera elements and will help the readers to not only understand all the basic camera functions but also remember them easily for a long period of time. The term “camera” used in this article can be applied to the latest high tech DSLRs, basic point and shoot cameras to the earliest form of cameras ever made. The history of cameras suggest that the beginning of the field of photography was built on the fundamentals of human eye and principles of vision. The basic purpose of this article is to familiarize you with all the rudimentary functions of a camera by giving analogous examples from the human eye so that the complicated concepts of photography can be easily related and understood. So let’s not wait any more and start the comparison.

Concept of front element of a lens:

The basic concept of the front element of the lens can be related to Cornea. The functionality of cornea is to let the light in the eye and then forwards it to the iris which controls the pupil. Similarly the front element of the lens lets the light into the camera and forwards it to the camera sensor where the picture is developed. Concept of sensor is analogous to retina in human eye. When light reflecting of subjects from the surrounding drops onto the retina, it develops an image in a human mind. Similarly when light entering the camera drops on the image sensor, picture is formed. Sensitivity of this sensor is related to ISO. 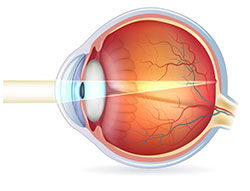 To get a bit technical, human eye actually had a dedicated night vision. Retina consists of rod and cone cells. Cone cells distinguish color in bright light. Rod cells distinguish black and white better and work best in low light. These rod cells have a chemical called rhodopsin inside. Rhodopsin consists of retinal and opsin molecules. Then a bright ray of light hits your eye rhodopsin splits into these two molecules. However, when you turn off the lights these molecules need a while to combine back together (about 15-30 minutes for a full effect). This is the reason why you can see Ok while being in a dark room for a while but once a bright light is switched on and then off swiftly, you lose your dark vision for a short while. But once the retinal and opsin combine again, you can see well in low light situations but would not distinguish colors well and you might even notice some “noise” in your vision.

ISO sensitivity is a bit different in that it doesn’t use chemistry but it does use voltage instead. When you increase ISO the camera boosts the voltage going into the sensor thus increasing its sensitivity at a cost of added noise in the photo.

Now the shutter speed in a camera is the amount of time the shutter remains open to let the light in onto the sensor. Our brain, however, works more like a camcorder than a camera where we combine a series of images into one continuous flow. So technically speaking out brain regulates “shutter speed.” It theoretically doesn’t go as high as 1/1000 of a second but we rather see fast moving object as a blur and thus perceive it as motion.

In bright and shiny lighting, there is large amount of light that cornea lets into the eyes and passes onto the iris. Due to bright light conditions in the surrounding, iris which controls the opening of the pupil, decreases the opening of the pupil to reduce the amount of light reaching the retina so as to compensate for the bright light conditions outside.

As oppose to bright lighting, in low light conditions, the iris being struck with lesser light, realizes it to be darker environment and hence orders the pupil to open up more than before. What this does is that it lets more light in to compensate for the dark conditions outside. This is exactly the same phenomenon that happens in red eye effect during flash photography. In low light conditions, the eye’s iris commands the pupil to open wide to let more light in. Now with the pupil of the eye wide open, when you click to capture a picture with the built-in camera flash, the flash reflects from the red retina behind the wide open pupil, hence causing red eye effect. The reason it mostly happens with built-in flash is because they are typically very close to the lens and thus reflect the light directly back into it. In modern cameras, there is a flash mode that illuminates the flash a few times before the actual exposure. What these initial flashes do is that they cause the pupil opening to reduce because of the bright flash lights and hence when the final exposure takes place, the aperture is already closed resulting in red eye effect reduction. Taking the flash off the camera and at an angular placement so as to avoid the red retina reflection onto the image sensor also eliminates red eye effect.

So that’s it. This is all you need to understand the basics of camera elements when compared with the functionalities of a human eye. Hopefully this way you will easily get the basic camera functionalities and will remember them for a longer period of time. 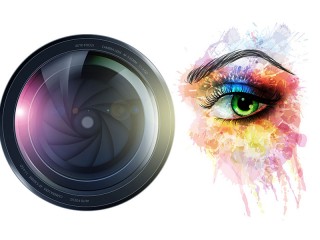